THE BBC’s flagship political panel show was once a civilised platform on which heavyweight politicians could debate. This is what it’s like now:

The weekly lumps of gammon

They sit there on Zoom all red-faced and furious. The fact that Brexit has happened hasn’t reduced their anger and sense of victimhood at the truly dominant forces in the UK: left-wing comedians, university lecturers, and the metropolitan elite who want to keep our jam jars golliwog-free.

For example: ‘I’m sorry, I’m going to have to interrupt you there, a government minister wants to gas on unchallenged for five minutes…’ Or as soon as anyone makes an interesting point: ‘We’re going to have to leave it there, thank you.’

To boost ratings, witless celebrities are invited on. Their research consists of asking their driver en route to the studio what’s been happening in the world lately. They then come up with moronic homespun ‘wisdom’ like: ‘If the government spends too much money, we’ll run out. That’s just common sense.’

It’s been drummed into them via media training that you evade any question that suggests you’ve f**ked up when you clearly have. But whereas past politicians did this with oily cunning, this latest crop of over-promoted, vacuous muttonheads do so with the finesse of a plank of wood.

Suddenly having a boom mic shoved in your face and a camera pointed at you would make most people panic. But approximately 50 per cent of the audience have genuinely unfathomable questions no one could answer, eg. ‘I went to the shops in Leicester so what’s all this inflation about?’

The woman who, despite the supposed difficulty of bagging a place in the QT audience, appears every other week to rant on fanatically about immigrants coming here to tear down our statues and cancel Laurence Fox.

Five things you'll take on holiday but never f**king use 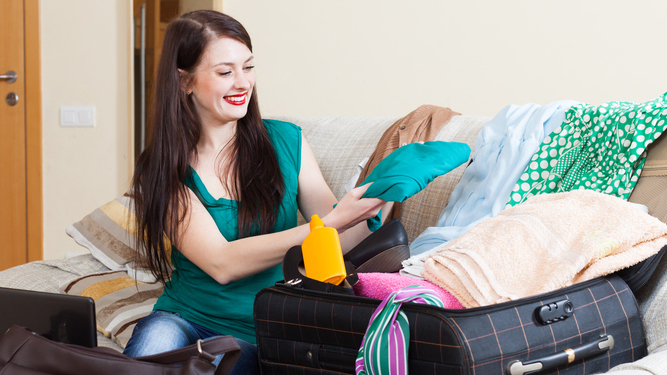 HOLIDAYS are tedious exercises in over-preparation that cost you a fortune. Here are five items you pack every year and never f**king touch.

Thanks to all the travel time and inevitable hanging around in airports, you’re bound to make progress on that book which has been gathering dust on your bedside table, right? Incorrect. It will stay firmly wedged at the bottom of your suitcase and take up valuable space for duty-free booze. Bin it now.

A ball-ache of an expense but a worthwhile one, or so you say to yourself before every holiday as you reluctantly piss away another couple of tenners. You never need it though because you spend the entirety of your vacation sitting by the hotel swimming pool and wishing you were at home watching TV. Live a little by neglecting to buy it next time.

An extra 30 pairs of pants

You’re only going away for a long weekend, so five pairs of pants will easily keep you covered. What if you get the shits on the flight though? And what if half a dozen pairs mysteriously vanish? These must be the scenarios that run through your head while packing because you’ve got enough underwear to last a month. And they’re all moth-eaten.

Having idly flicked through a phrase book while on the toilet, you’re equipped with a rudimentary number of foreign phrases that make a toddler seems eloquent by comparison. Rather than doing the polite thing by trying to use them in conversation though, you’ll mumble, stutter, then just speak English slowly and loudly. It’s what everyone expects.

The ability to relax

Every holiday you’ll think this will finally be put into use, and every holiday you’re proven wrong. If you’re not getting stressed out about getting to the airport on time, you’ll be worried that you’re not making the most of your precious time off. You’d have a more relaxing time just staying at work and doing a really half-arsed job.