ARE you totally uninterested in football but face weeks of men kicking a little a ball around and analysing it? Read our handy tips for making it less tedious.

Take a fuckload of drugs

The ideal World Cup drug is probably LSD. Even the dullest Iceland vs. Saudi Arabia clash won’t be boring if the TV remote grows a face and starts whispering to you.

Note: If you’re watching in the pub, it’s probably not a good idea to be so high you’re laughing hysterically as England inevitably gets knocked out in the quarter finals.

Make your own game of World Cup buzzword bingo

Make your own bingo card of grimly overused football phrases. Here are some to get you started:

● “Germany showing all the Teutonic efficiency that brought us the excellent Braun Oral B electric toothbrush.”

● “They’ll be dancing like wankers in the streets of [capital city] tonight.”

● “Write them off at your peril!” (Just before the struggling team concedes 15 goals and the captain shoots himself.)

Offer absurdly fuckwitted analysis of what’s happening on the pitch, eg. “Six-nil is a mountain to climb for Morocco, especially with four minutes to go, but they said the Titanic wouldn’t float.”

You may be surprised what you can get away with, and quite possibly be regarded as a ‘football intellectual’.

Pretend to watch the football while actually watching something else on a pair of smart glasses. Hey presto! Spain vs. Iran or Chris Waddle’s interminable moaning about FIFA becomes something life-enriching like Toy Story 3.

To really be gripped increase the sums from merely irresponsible to financially insane, eg. remortgage your house and put £80,000 on England vs. Brazil. You’ll be the keenest England supporter in the country!

May jacking it in for job at Aldi 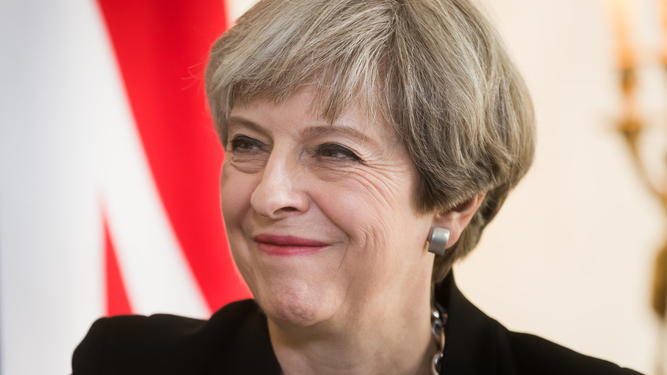 BREXIT is such a massive fuck-up that Theresa May is quitting politics for a less stressful life working in Aldi.

After spending several weeks trying to stop MPs fighting over deals that will never exist, May is resigning to retrain as a store assistant at an Aldi in Bracknell.

May said: “As you might have noticed from my constant strained grimace and cack-handed bungling of everything I do, I’m finding Brexit to be a total fucking nightmare.

“Stacking shelves at Aldi doesn’t have the same glamour as being PM, but I think there’ll be more job satisfaction in neatly lining up packets of ‘So Malty’ malt loaf than shafting the UK and being hated by everyone forever.

“I’m also looking forward to being able to relax in the evening, rather than nervously refreshing the BBC News website in case Boris has told the Indian finance minister we’ve got the recipe for curry now.

“And of course I’ll get first dibs on all the treasures in the middle aisle. They’ve got inflatable kayaks this week, you know.”

May’s Aldi supervisor Donna Sheridan said: “Theresa came in this week to start learning the ropes but she put dog food in the toothbrush section. How the fuck do you manage that?”