Rugby 'victory' was planned to make Wales feel good about itself

ENGLAND deliberately lost to Wales as part of a plan to boost the smaller country’s morale, it has emerged.

The Welsh ‘victory ’caused an upsurge in national pride for a country embattled by unemployment, inhospitable weather and the literary trend for terrible books about talking dragons.

However, excessive gloating by Wales fans caused English supporters to reveal that the team was not actually trying.

England fan Tom Logan said: “We agreed it was time we did something nice for the Welsh, apart from filming Doctor Who there.

“Every once in a while they should feel like they live in a proper country and not just a Tolkeinesque tourist attraction.

“When you think about all those miners, the tears streaming down their coal-smeared faces, you have to do something.” 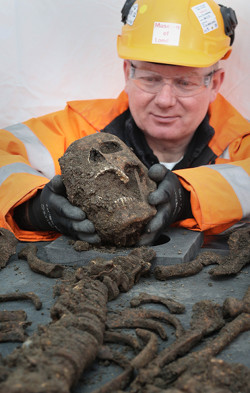 IT might be an idea to fill-in a big hole full of plague victims as quickly as possible, it has been suggested.

Railway engineers working on the London Crossrail project discovered the bodies and then went to the pub without even washing their hands.

Transport for London confirmed that at no point did they immediately fill the hole with concrete and bleach as if their lives depended on it.

Professor Henry Brubaker, of the Institute for Studies, said: “Twenty-first Century apathy has reached the point where we are now blasé about the plague.

“While commuting in London can often seem much worse than the black death, that’s really just a way of expressing how much you hate it.

“It’s not actually the plague, or indeed a big hole that might have loads of plague in it.”

He added: “I’m not scaremongering, it’s the black death. They didn’t call it that to make it more fashionable.”

A Transport for London spokesman said: “The only way Crossrail is going to work is if half the people in this city are wiped out by a virus.