Six deliberately irritating questions to ask during the match

NOT understanding the offside rule is for amateurs. Try these questions to get your football-loving companion truly enraged:

A simple yet infuriating question to kick things off. Match their impatient clarification of Mo Salah not being English by pointing out Liverpool is in England. Watch them become increasingly annoyed and their forehead bead with sweat.

Why are there three lions on the shirts then?

A good one to bring in during a free kick. A difficult discussion about the history of England’s livery and emblems, and the point at which patriotism slides into nationalism, will really wind them up.

They have VAR so why are you shouting that it’s wrong?

Mentioning VAR is always an easy shortcut if you want to see a vein pop after a goal has been disallowed. Add that you believe constantly pausing the game for maximum accuracy really improves the sport and they’ll start fantasising about throttling you.

So is this part of the European Super League?

A back-up in the chance that they have no strong feelings on VAR. Brace yourself for a long, angry rant about the game’s rich heritage and the death of football as we know it, even though the ESL has been canned.

Just what did happen in the Balkans?

The minutes are ticking on and your companion is boringly calm, but do not lose hope. Start hassling them with the nitty-gritty of late 20th century conflict, preferably when someone from England has the ball.

Is that dirt on the screen?

Both you and the game are into injury time so it’s time to pull out your silkiest moves. Thoroughly investigate and clean a smear in the corner of the screen, ensuring that the back of your head is all that can be seen during the precious final moments of the match. 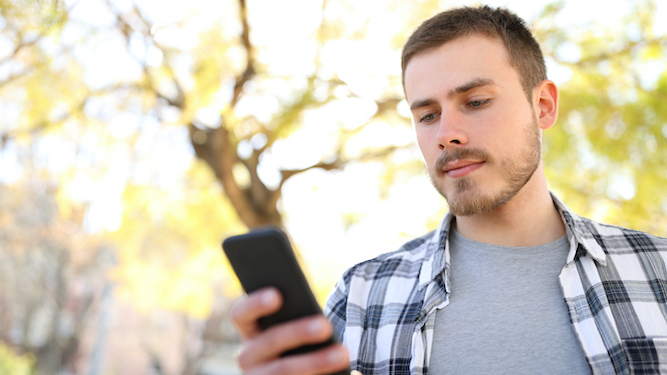 A MAN is getting constant, eager updates from a delivery company advising him on the precise whereabouts of his parcel.

Tom Booker has received a series of thoughtful text messages advising him variously that his parcel has left the depot, will be delivered in 0.3 hours and his driver Frank is a Gemini.

Booker said: “What happened to the old way, when you waited for nine days not knowing where your parcel was, then got a card through the door saying it was languishing in a returns depot on the outskirts of Derby?

“Now you receive endless texts detailing every step of your parcel’s journey, from the moment it’s picked from the shelf in the warehouse to the point where the driver stops for a piss in a lay-by and a sandwich. Frank had cheese and pickle, apparently.

“I felt like I’d developed an intimate relationship with Frank and worried about whether I should greet him formally when he arrived or hug him like an old friend.

“Sadly I didn’t see him when he got here because I was on the phone. And now I miss his constant attentive updates and feel bereft.

“All this for five pairs of socks. I’ll get them from Tesco next time. It’ll be less emotionally draining.”