LIVERPOOL’S poor start to the season has been traced to an ancient Arapaho curse under the Kop End at Anfield.

Roy Hodgson has endured a terrible run of results, culminating in yesterday’s game against Sunderland where a harmless clearance by Pepe Reina was headed back into Liverpool’s goal by a ghostly warrior riding a horse and wearing a Tranmere Rovers shirt.

Hodgson said: “It was like that Poltergeist film where the whole house implodes, only Konchesky and Skrtel are much, much scarier to look at than the bloke who tears his own face off.

“The whole place is a nightmare to work in – you leave the training cones alone for five minutes and they’ve rearranged themselves into a twelve-foot-high stack in the shape of Steve Heighway. And we didn’t really transfer Rieira over the summer, he’s actually trapped in the telly in the canteen.”

The curse was brought to the club by owners Hicks and Gillett, who bought a job lot of bone meal fertiliser that was later discovered to contain the remains of Arapaho elders killed in the Sand Creek Massacre of 1864.

Hicks said: “When the bags of fertiliser first arrived, I thought they smelled a bit sacred-y and I did wonder why there was blue ectoplasm shooting out of them. I heard a disembodied voice screaming curses at me too, but to be honest I get that a lot.”

TV bullshitter Derek Acorah has visited the ground and declared the only way to lift the curse is via a series of celebrity seances, adding that he could probably have a crack at Torres’ persistent injury problems if they threw in a book deal as well.

Liverpool’s situation mirrors the fate of Wigan Athletic, who were relegated in 1993 after buying a set of goalkeeping nets found to contain the soul of an orphan boy who died in tragic circumstances. The curse was eventually lifted by sprinkling them with a phial of Jimmy Hill’s urine.

Lohan Still Looking Pretty Good For All The Drugs, Doctors Have To Admit 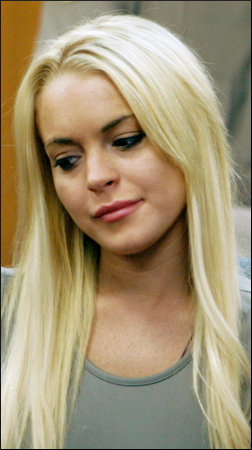 TROUBLED actress Lindsay Lohan is still highly do-able despite all the drugs, doctors have conceded.

The admission follows the publication of photos which seem to show the Mean Girls star injecting heroin, indulging in convincing pseudo-lesbianism with Paris Hilton and probably fellating a horse dressed as John Candy at a sleazy Hollywood party of the type you can only dream of attending.

Experts believe the images are clear evidence that the intervening three years of ultra-hard partying have had no effect whatsoever on the actress’s looks, and that if anything she’s gotten even more darkly alluring.

Dr Martin Bishop said: “As a member of the medical profession I would dearly love to use Lindsay Lohan to illustrate the horrific physical effects of drugs to her young and impressionable fan base.

He added: “I should probably point out that her wanton excess has however led to a harrowing stint behind bars which has either ruined her life or made it seem even more incredibly exciting and cool in an 80s, straight-to-video sleaze sort of way, depending on how you look at it.”

Professor Henry Brubaker, of the Institute for Studies, said: “Maybe it’s good genes or something. I mean, people say she’s lost it, but if you spotted her in Asda it’d be like seeing a rare orchid growing out of a bunged-up Glasgow toilet bowl.”