THE greatest racehorse of all time is to become a professional snooker player.

Frankel has announced his retirement from the world of racing, having decided to shift his focus to the green baize.

Former snooker world number one Cliff Thorburn has been coaching the horse, who holds a cue via a specially-designed prosthetic hand that fits over his hoof.

Frankel said: “Racing is great but there are minimal tactics apart from ‘go slow for a bit so you don’t get knackered’. It’s hardly cerebral.

“I want mental stimulation, tactics, and a fan base that isn’t just intoxicated Irishmen.

“I’m a perfectionist in everything I do and absolutely confident in my abilities. In fact the hardest part will be not shitting everywhere as I’m used to being outdoors, crapping as I please.

“I’m debuting against John Higgins at the Crucible next month and I’ve already been warned that if I take a shit on the floor it’s all over.”

During his spare time, Frankel will also be participating in a breeding program.

He said: “It’s sex on tap, but I want to meet a nice mare and settle down, which is hard to do when they just see you as a semen delivery mechanism.” 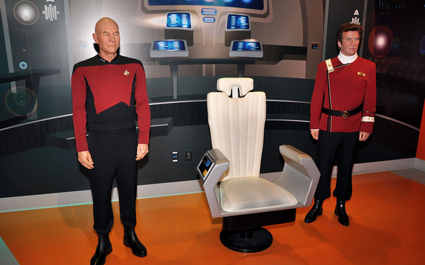 FOUR Star Trek fans have been arrested after a phaser battle erupted at a London convention.

A stallholder selling Leonard Nimoy books was left temporarily inert after being hit on the thigh by a blast of concentrated energy.

Onlooker Tom Logan said: “Someone was trying to get William Shatner to sign his name on their face in Klingon.

“People in the queue were getting restive and a bolt of light was fired. Luckily a security guard was able to disarm the culprit with a Ferengi energy whip.”