Hopes rise that cycling will now be banned

THE Lance Armstrong drug scandal has raised hopes that cycling can now be stopped altogether.

Armstrong has been stripped of the seven Tour de France titles that bored people so comprehensively between 1999 and 2005.

Now campaigners want to seize the latest chance to end cycling in all its monstrous varieties and have all bicycles confiscated, melted down and turned into cars.

Tom Logan, chairman of Please Shut Up About Cycling, said: “Everyone knows that the best way to make something more interesting is to throw a load of drugs at it.

“But with cycling it simply didn’t work. Instead – and this may seem outlandish – it actually made it even more tedious.

“It’s a large group of obsessives travelling at 25 miles per hour. If you came across them on a country road you would hate their fucking guts.”

Logan also stressed that nothing was more symbolic of Britain’s decline than its hysterical pride ‘in a bunch of shaved robots’.

“Sideburns and bowling shoes do not a personality make. If he had a four foot-wide handlebar moustache and wore a shocking pink mini-kilt then that would be a start. But it doesn’t really matter because ultimately he’s still just a dreary knee-pumper.”

Logan praised Armstrong adding: “For every Wiggins, Hoy and Pendleton who inspires a child to get on a bike, we need a Lance Armstrong to shame them into getting straight back off again.

“And to all those who say that cycling is the ‘answer’, I say ‘shut your face’. 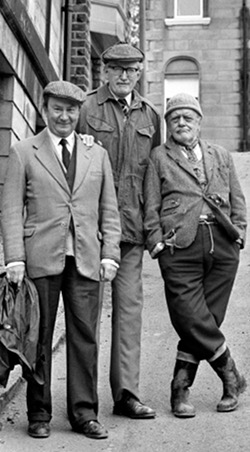 JOHN Motson has renewed his BBC contract until 2052, in line with the Corporation’s policy to ensure everything remains exactly the same.

There were fears that the football commentator might retire at some point, leaving viewers vulnerable to the feeling that the world has changed since 1972.

But BBC insiders said that a Motson departure would be too great a shock for licence payers following the abrupt cancellation, after just 37 years, of Last Of The Summer Wine in 2010.

John Motson began at the BBC as a perky, ambitious young broadcaster who, over many decades has grown old, surly and harrowed by the creeping spectre of mortality. He must be addressed by staff as ‘Mr Motson’ at all times.

But according to the terms of his contract, ‘Motty’, as he is known to people he despises, is a ruddy-faced fellow in a sheepskin coat with a nerdy love of stats who has been 48 years-old since 1976.

The Corporation is particularly keen on retaining commentators over vast lengths of time in order to sedate their viewers with an illusion of continuity. Voice of tennis, Dan Maskell, is still on the BBC payroll 20 years after his death.

A BBC spokesman said: “Viewers like not being told every little thing that’s going on. The dead are very good at that.”

Experts say Motson may attempt to emulate Frank Bough, who was forced to fabricate a sordid cocaine-sex scandal to break his 400-year Grandstand contract.

But a BBC spokesman said: “Motson can enter a goat as far as we’re concerned. He’s going nowhere.”