MARTIN Jol is to be sat  sat down and have the last 50 years of football explained to him, the FA has confirmed.

The boulder-headed Fulham manager lodged a complaint about Liverpools pursuit of striker Clint Dempsey with the heartbreakingly naive and misplaced anticipation of fairness normally only seen in abattoir-bound lambs.

An FA spokesman said: “He was just crying and shaking and asking why Clint preferred a team that were prepared to pay him twice as much as he is, all the while clutching a Dempsey scarf hed made.

“He really did think that the adoration of thousands, more money than can sensibly be spent in a single lifetime and job security in a recession would be enough to make a normal person want to stay.

“I hardly had the heart to tell him.”

Jol will now spend the next week in the FAs office going through videos of English football, starting in 1960 with lots of  Brylcreemed, gap-toothed ex-miners treating it like an actual job.

If Jol still considers Liverpools conduct to be unusually unscrupulous by the time they reach the 1980s, he will be tested for brain damage and told to grow up by Stuart Pearce.

Fulham also made enquiries about why they are not playing in the Champions League, why they cant have an 80,000 seater stadium like Barcelona and why other teams are allowed to have players that are quicker, stronger and better than theirs.

The spokesman added: “We’re going to explain it with puppets.” 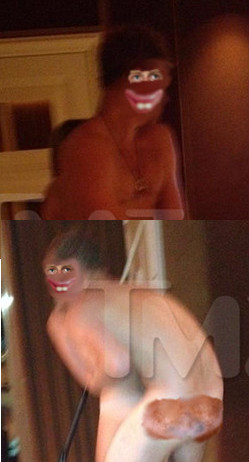 TREASURED photographs of Prince Harry naked in Las Vegas have been ruined by an elderly Spanish woman.

Cecilia Gimenez, from Zaragoza, was hired to restore Ecce Harry, hailed by art historians as a key example of neo-smartphonism.

The images had become badly worn after being looked at on the internet, but instead of enhancing the detail around the Prince’s upper crotch, Mrs Gimenez gave him a buck-toothed clown’s mouth and covered his buttocks in thick, reddish-brown hair.

Art critic Julian Cook, said: “She’s obviously used his eyes from a different photo and while the clown’s mouth is a daring choice, she’s plastered it on to the side of his face and expected it to look normal.

“Also, I’m pretty sure the buttocks have been cut and pasted from a photo of an adolescent orang-utan.”

Eighty-one year-old Mrs Gimenez  said: “TMZ called on me to bring the photos back to life and strip away the top layer of recently added pixels to perhaps reveal a glimpse of the Prince’s concealed genitalia.

“But I thought it would be a shame not to celebrate his lovely smile and dancing eyes.”