Lawrenson, who around 2001 started using the word ‘not’ at the end of sentences for deadpan, ironic effect, decided the time was right for an even more futuristic gambit.

Lawrenson said: “The great thing about this phrase, and I’m amazed no one has picked up on it, is that it has multiple applications.

“You could say, ‘Waazzzuuppp? Wayne Rooney’s chances of being selected for England are in the balance what with younger guns like Jamie Vardy coming through’.

“Or you could say, ‘Waazzzuuppp?’ for no reason whatsoever and leave it hanging in the air in the hope that your co-commentator would chuckle appreciatively and give you a high five.”

He added: “I’m prepared to move with the times. What I’m not prepared to do is part my hair at the sides rather than the centre.  I am not Simon Le Bon.”

Man uses mindfulness to accept he is a twat 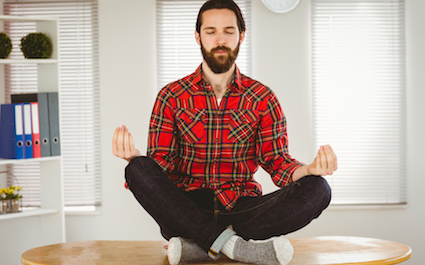 A MAN has confirmed that mindfulness has helped him calmly acknowledge and accept his own twattishness.

Brand consultant Joseph Turner believes that only by meditating on his own feelings, without judging them right or wrong, could he come to terms with what an absolute twat he really is.

He admitted: “At first I was doubtful, because mindfulness is so twatty to begin with and I’d been avoiding anything like that in denial of my nature.

“But when I sat down and really paid attention to the present moment, allowing myself to feel my superiority over my brother-in-law because my trainers are a more limited edition  than his, something changed in me.

“I could stand back and see the pattern of my thoughts – choosing a different coffee every day to confuse the intern, mobile conversations on the train about my safari holiday, my love of Chris Moyles – and suddenly it was so clear.

“I am a twat, and I don’t need to be ashamed of it any longer.

“I practice mindfulness once every day now, always making sure to tell everyone about it beforehand. If anything I’m getting even twattier.”