Sir Dave Richards insisted eggs were first mixed with foo and yung in Sheffield more than 1,500 years ago and then a ‘Chinaman hypnotised everybody and made off with the pot’.

He said: “And 70 years ago my Uncle Eric invented spaghetti, went to bed and woke up the next morning to find he had been kidnapped by Mussolini.”

Richards then stepped on a roller skate and went hurtling through a jam factory before crashing head-first into a wasps’ nest.

After washing off the jam and changing his clothes, he continued: “I haven’t been that angry since Germany stole my idea for a motorised car.

“That’s what they do the Germans, they steal your idea for something nice, like a Morris Marina or a Hillman Imp, and they turn it into a Mercedes Benz.”

Richards then stepped on a rake, spun round, walked into a lamppost, stumbled on to a tea trolley which then rolled down a hill, through a barn full of noisy chickens and finally came to a stop when his head became embedded in the rear end of a horse.

He added: “Pele’s from Huddersfield.” 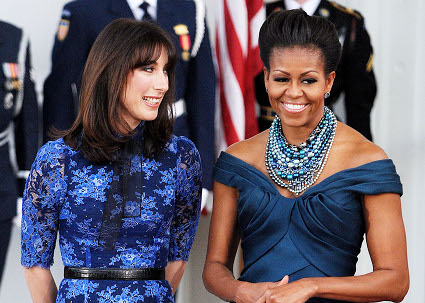 US First Lady Michelle Obama is avoiding Samantha Cameron because she is tired of discussing rap music.

Mrs Cameron is understood to have opened the conversation by asking Mrs Obama who she had backed in the ‘Drake-Common beef’.

A White House spokesman said: “The First Lady was hoping to discuss education but was instead dragged into a conversation about whether rappers should sing or not.

“Mrs Cameron then expressed her concern that hip hop had been assimilated into mainstream culture and urged the First Lady to listen to Blackalicious and Blaze Ya Dead Homie.”

A Downing Street spokesman said: “Mrs Cameron stressed that while motherhood was a privilege she was sure the First Lady shared her love of putting the kids to bed, cranking up some Ol’ Dirty Bastard and getting toasted.”