SCOTTISH football fans have insisted their bigotry begins and ends with the precise manner in which someone worships Christ.

Brazil’s Neymar was subjected to prolonged booing during Scotland’s traditional arse-handing but it is believed this was due to confusion over which church he attends.

A Scottish FA spokesman  said: “The protestants thought he was Papist scum while the Catholics were unsure about his commitment to achieving a united Ireland through terrorist violence.

“If he turns out to be Muslim or Buddhist then we’ll issue an unreserved apology along with a cheerful comment about how much we all love a curry.”

He added: “It’s upsetting that he thought we were being racist as our fans are famous for being jolly and friendly and too drunk to remember where they left their machetes.”

The spokesman also denied a banana was thrown at Neymar insisting it was probably sneaked into a fan’s packed lunch and then thrown away in terror and confusion by someone who has never encountered fruit.

But Neymar said: “You don’t see this kind of thing in my country amongst adults who have managed to avoid being killed by police death squads. And when we eventually get around to electing a black president I’m sure he’ll denounce stuff like this.”

The SFA hopes to rebuild Scotland’s reputation when they face Wales in Cardiff for their opening match in the Nations Conquered by The English Cup.

The spokesman added: “It should be a cracking atmosphere as 70,000 Catholics, Presbyterians and Methodists scream abuse at each other over something that happened in a field 300 years ago.” 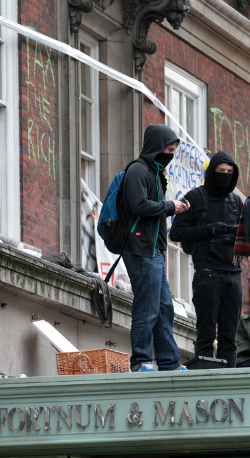 BURNING Fortnum and Mason to the ground is a more credible alternative to the budget cuts than Ed Miliband, a survey has found.

In the wake of Saturday’s anti-cuts flounce, 42% backed the government, 5% said ‘don’t know’ and 53% said they would like to set fire to an overpriced food shop and throw a breeze-block at a five star hotel.

Helen Archer, from Peterborough, said: “I’m an anarchist now.  Like the Labour Party, anarchism is inherently destructive but at least it’s backed up with an actual set of ideas.

“The trade unionists were saying that all the rich people should be taxed more, but, as my five year-old daughter pointed out, ‘if we tax the rich people as much as that mummy, they’ll just fuck off to Hong Kong’.

“But even though the trade unions are stupid and wrong and their leaders are fat, nauseating, chauffeur-driven hypocrites, at least they’re saying something.

Architect Nathan Muir added: “I have swithered over how far and how fast we should cut, but now I just want to go to London every month and kick the fuck out of some famous shops.

“I am also opposed in principal to authority of any kind and believe the nation state is a barrier to human progress, but it’s the kicking fuck out of stuff that really speaks to me.

“And I would also loot shit loads of that anchovy paste in the little white tubs. It’s lush.”

Meanwhile economists confirmed that wrecking the centre of a major city every four weeks would create more employment than a 2% cut in corporation tax and everyone would have a brilliant time.

Julian Cook, from Donnelly McPartlin,  said: “Unemployed glaziers, joiners and painters and decorators could all throw on a bandana, smash the fuck out of Top Shop and then repair it the following week. Meanwhile it would make great telly and Top Shop could sponsor it.”

Last night the government said it would listen closely to the demonstrators’ demands before pledging to abolish the 50p tax  rate and give a free back rub to Britain’s 500 cruellest millionaires.