Show-offs run 26 miles ‘because they’re better than you’

THOUSANDS of attention seekers ran 26 miles across London just to make everyone else feel bad about themselves.

The self-indulgent runners brought the capital to a standstill in a pathetic bid to prove how fantastic they are while the rest of the country had two bags of crisps for breakfast.

Runner Emma Bradford, who completed the marathon in a ‘personal best’ of two hours and 58 minutes, admitted she is motivated entirely by spite and the prospect of humiliating others.

She said: “Tomorrow I’m going to go round the office asking everyone how their weekend was and then I’m going to pull out my medal and watch as they realise that they are worthless.”

Non-runner Stephen Malley, from Stevenage, said: “The only reason for someone to run 26 miles while dressed as a tea cup is because they’re a fascist who wants to turn this country into a health-based dictatorship controlled by runners and cyclists and throw people like me in jail.

“The London Marathon is a neo-fascist rally. You can ignore it if you want, but that’s what’s happening.”

Obama asks who Boris Johnson is then laughs when told 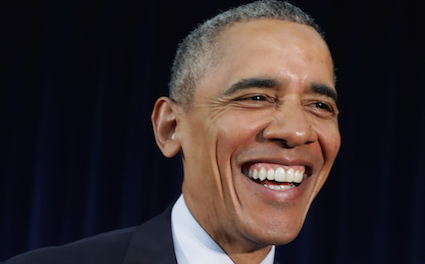 Obama became aware of the child mayor of London this morning after Johnson suggested the two-term President of the United States was just an angry African who knew nothing about global politics.

As Obama arrived in the UK, a White House spokesman said: “The President was told that while Mr Johnson is a popular English politician, his popularity is based on people laughing at him, not with him.

“After relating Mr Johnson’s colourful personal history, including the Bullingdon Club and the extra-marital affair, the President’s advisers then described Mr Johnson’s general appearance and the way he talks.

“The President found all of this highly amusing, particularly the idea that Mr Johnson is the favourite to succeed Prime Minister Cameron.”

The spokesman added: “The President chuckled and said that Britain had become ‘kind of embarrassing’. He then moved on to more important matters, including how he plans to annoy Prince Philip this evening.”