Villas-Boas allowed to drink with grown-ups

TOTTENHAM Hotspur manager Andre Villas Boas has been allowed into the White Hart Lane bar as a special treat.

Villas Boas previously had to sit outside in the car after matches, with Spurs chairman Daniel Levy or one of the senior players bringing out soft drinks and crisps for him every half hour.

But as a reward following the team’s victory against Reading, he was allowed inside to drink shandy, straight from the glass and not even with a straw.

Villas Boas said: “It was really great. I spoke to Mr Levy and even the players like Mr Defoe.

“They knew my name and everything. By the time I was taken home it was nearly dark.”

Villas Boas’s nanny Emma Bradford said:  “You should have seen him there, in his long trousers. He’s been in the dressing room and talked to the players and even sat in the dugout but never this.

“All his friends are really jealous of him.”

Daniel Levy even found the time to sign a special cheque for Andre as a souvenir of his short time with the club.

Levy said: “Andre is a very bright boy with lots of ideas about the way we should play and who we should sign.

“When he grows up a bit more, there’s every chance he’ll be manager of a big team and win lots of trophies and perhaps the Premier League.

“Of course, that won’t happen at this club but one day, at some other team, who knows?”

Downton to just call audience a bunch of morons 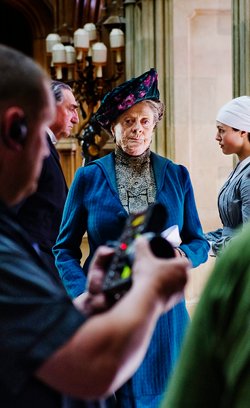 BLOCKBUSTER drama Downton Abbey will this week finally tell the unvarnished truth to its cretins.

For two years the sub-Falcon Crest Edwardian soap opera has subjected its 10 million viewers to a regular salvo of barely-concealed loathing.

But, with viewing figures still stubbornly high, this week’s episode will weave the trademark plot devices with unambiguous insults and blistering sexual profanity.

Creator, Baron Fellowes of Cathedral City, said: “Oh, that I could hunt them down with a quintet of perfectly hungry Jack Russells and watch them being torn to shreds while I toot my fancy horn and my favourite gelding groans happily beneath me.”

In a key scene Lady Mary Crawley will tell a haunted young man: “Oh Dinky, being on the Titanic and then trying to save the Tsar must have been so very beastly. And then to come home to these ghastly motor contraptions and their infernal honking. It’s the last thing a Dinky needs.”

Actress Dame Michelle Dockery will then turn to the camera and say: “You do know you’re a bunch of utter fucking losers?

“The French are currently enjoying their delicious dinners and gleefully discussing the absurd nature of royalty. And you’re watching this. Cock – The Fuck – Off.”

Dockery will then look off camera and ask if there is, “any chance we can change the family name to ‘Pishflaps'”.

In a later scene Dame Shirley MacLaine will tell sturdy butler Charles ‘Charlie’ Carlson ‘Carlie’: “I was in The Apartment. I won a fuckin’ Oscar for Terms of Endearment. This is what I get for believing in UFOs.”

The Earl of Grantham, played Sir Hugh Bonneville, will then reply: “That’s a tad harsh, mummy.”

Meanwhile, the closing music and titles will be replaced by a cacophony of discordant electric guitars as the words ‘fuck you’ flash rapidly in gigantic, bright red capital letters.