Why we represent the average football fan, by Bozza and Willy

WILLY: Villa fan, that’s me, that’s how I define myself. Villa comes first, before my wife and kids, before Britain, before the institution of monarchy. If you cut me I’d bleed claret and blue, and then I’d cut you mate. Yeah. Don’t start nothing you can’t handle.

BOZZA: I am very much a London fan, of the London teams. I can’t choose between them because they’re all so good. You know me, if I pledged my allegiance to Chelsea I’d end up cheering on Fulham behind their back. So I support them all, which is normal, and when they play each other I cheer for both.

WILLY: And this Super League bollocks is well out of order. Villa are absolutely a big club. Seven championships. Last one in 1981, 20 years after Spurs’ last. And for that reason alone, this bullshit is going down.

WILLY: Is for me mate. It’s a bloody disgrace. We’re top table.

BOZZA: But also what I’ve been hearing from fans like myself is that this is elitist, anti-democratic and a stitch-up that locks ordinary people out of a system they pay for. And it was such a relief to hear all that directed at something that wasn’t my government that I’m going in studs-up.

BOZZA: I’m not afraid to break rules. Remember when I headbutted that German in the cock in a charity match in 2006? That’s what I’ll be doing to the Super League.

WILLY: Yeah. Ed Woodward? Me and the Villa Hardcore know where you live. Bring your Spanish mates and bring your dinner, because you’ll need it when I’ve finished with you. 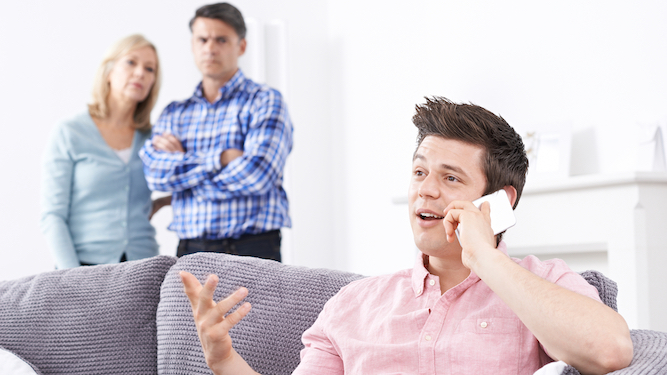 MUM and dad have said that there will always be a place for you in their home, which they didn’t mean altogether positively. Here are the signs they want you to piss off:

They discuss their sex life over dinner

You’re an adult, you’ve been for a pint with your dad, you’ve discussed politics. But do you really want to hear your mother discussing how, post-menopause, there are ongoing dryness issues? No. Which they well know, which is why it came up over the pasta bake in the first place.

They leave sex toys around the house

The advent of the dishwasher-safe sex toy was the greatest moment of domestic liberation since the invention of the microwave. But do you really need to see ominously-shaped silicone objects in the rack next to your treasured Thomas the Tank Engine egg cup? What are your parents trying to tell you?

How did you reach your late 20s without realising the true relationship between your parents and ‘Uncle’ Barry and ‘Auntie’ Sue? When they’re mentioned in connection with ‘going full poly’ and ‘Barry’s trawling Tinder for a unicorn, but no luck’ perhaps the penny will drop. And perhaps it’s not just Barry and Sue who aren’t who you thought they were.

Saturday June 26th has been circled on the calendar, and you’ve been asked if you mind your room being the cloakroom. Phone conversations are about tarpaulins, bulk-buying lube, and your old physics teacher Mr Harvey appears to be a weekend gimp.

You know what? If you go to the kitchen to make a cup of tea and by the time you come back there are knickers hanging from the door handle and the sound of enthusiastic, no-holds-barred banging drowning out The One Show, then maybe it’s time you looked into renting your own place. Yeah?