THE two Yorkshire stages of the Tour de France will include the county’s pensioners in homemade comedy vehicles.

Roughly a third of Yorkshire’s population are affable pensioners who accidentally travel using baths, desks, and Bessemer converters which have been repurposed as vehicles.

A spokesman for Visit Yorkshire said: “You can’t visit God’s Own County without witnessing a cloth cap-clad 76-year-old crashing a makeshift gyrocopter into a river, and we’re delighted the Tour is honouring that tradition.

Old men enjoying second childhoods should begin their contraptions now, in good time for them to lurch unexpectedly into life, taking them through the Tour and into a hedge to the mournful sound of a trombone.

Already entered into the Yorkshire legs of the Tour de France, officially called TTour, are a mine cart, a double-decker wheelchair, a tractor-tyre unicycle, a grandfather clock rocket sled and a Robin Reliant.

Tour director Christian Prudhomme said: We are keen to recognise local traditions in the Tour, even if they are very, very stupid.

Though none of these entrants will be allowed to take part in the subsequent Cambridge to London stage. This is a serious event, and for that section all the cyclists must be riding the regulation Sinclair C5. 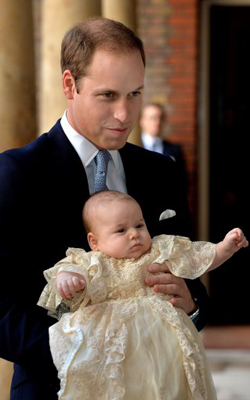 THE heir to the throne thinks Christianity is a load of nonsense, it has emerged.

The infant was left bitter and angry after being dressed up like a tiny old lady and baptised against his wishes.

Desperately flailing his plump limbs, the future king said: “Get…off…me…I have no interest in your strange, outmoded belief system!”

He continued: “At this age I just want to lie on my back smiling at brightly coloured plastic objects. I don’t think that’s unreasonable.

“I should at least be at the stage of changing my own underwear before choosing a spiritual path.

“However if it was up to me – which clearly it isn’t – I’d probably choose to worship the egyptian gods, particularly Horus.

“He’s a super-muscly guy with a bird’s head. That’s the sort of tangible superhero god a young boy can relate to.

“I can also see myself getting into tarots, crystals and occultism. Who knows, maybe I could be the next Aleister Crowley?

“Anyway I hope you all had a nice time today. I’m soaking wet now, and thoroughly pissed off.”