What totally regrettable thing will you be doing if England win... or lose?

WITH a chance of going through to the World Cup final at stake, England vs. Sweden is going to be somewhat tense. So how will you be losing your shit over the outcome?

Offer to buy everyone in the pub a drink. Then remember there are bloody 300 people there precisely because it’s a crucial England game. Do the only sane thing and run off.

Get an England tattoo, ideally something deranged like the entire team drawn on your body. Then really hope they win the tournament because you’ve got Gareth Southgate’s frowning face peeking over your collar for the rest of your life.

As is traditional, strip off and run around naked. Note: Do NOT do this in places with a large number of nettles, barbed wire fences or ‘paedo hunter’ vigilantes.

Get drunker than you’ve ever been before. Have your enjoyment of the quarter-finals somewhat marred by drinking your lager through a straw.

Shamefully vent your anger on anything Swedish. Smash your copy of Abba’s Arrival then, in a fit of regret, mentally apologise to Agnetha, Anni-Frid, Benny and Bjorn.

Despite being a grown man, sob uncontrollably like a little girl who’s lost her dolly. Then remember everyone has a camera on their phone and it may not be the last time you hear of this.

Get drunker than you’ve ever been before. Have your misery at England being knocked out compounded by not being able to open a Becks due to your plaster casts. 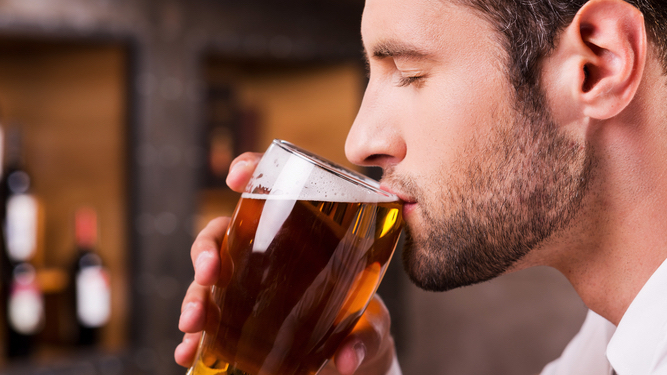 A MAN who confidently told friends he was sticking to soft drinks caved after a pathetically short period of time.

Martin Bishop arrived at the Golden Lion pub proclaiming he would not be drinking due to an important meeting the next day, but was halfway through a pint of Stella within 420 seconds.

Administrator Bishop said: “I was full of good intentions because the last time I had a meeting when I’d been out the night before I kept being sick in my mouth every time my boss’s back was turned.

“Sadly as soon as I was offered a lovely cool glass of beer I just couldn’t resist. It was like being drawn to a seductive siren made out of 5% lager.

“If I’d stopped after three I’d have been fine. But I ended up having seven and then my mate persuaded me to go to a nightclub called Fanny’s.

“I don’t know what happened after that but I woke up this morning lying next to a half-eaten kebab. At the meeting I was praying for it to end before I was sick in a bin.

“Obviously I’m never drinking on a week night again. Next week it’s Diet Coke all the way at my old drinking buddy Steve’s leaving do.”