Ask Holly: My poor wife has been robbed and now I am truly narked

I’m really, really, really cross. I am hopping mad. My poor wife has been held up at gunpoint and robbed and now I am truly narked. I am going to find those French nincompoops and give them one of my shattering death stares and then do an angry rap all up in their face whilst dressed entirely in beige. NO-ONE MAKES KANYE LOOK STUPID EXCEPT KANYE!

Have you ever tried mindfulness to help you calm down? My mummy has started doing mindfulness to help her manage her dreadful mummy-rage. It’s really good: instead of going mental when we leave dirty dishes and clothes lying about, now she just smiles sweetly and colours in a picture of a peacock in her adult colouring book. This is good news for me because I’ve just remembered I left my used swimming kit and a half eaten apple under my bed six months ago and I need it for school tomorrow.

I still might be shit at this, says Theresa May 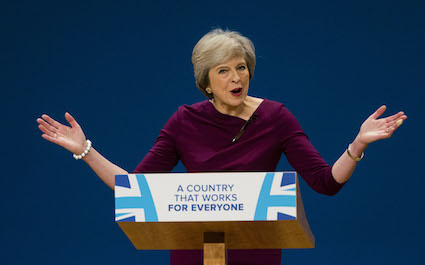 THERESA May confessed to the Conservative party conference that she could well be dreadful at her job but there is only one way to find out.

The prime minister told attendees, in a mediocre but candid speech, that there was every chance that she was going to ‘fuck Britain right up’ but we might as well get it over with.

She continued: “Let’s face it, I’m untried at best and am heading a government full of weirdos you don’t recognise.

“There’s no functioning opposition and we’re about to embark on something which has never been done before and is widely predicted to be a total disaster.

“Look at me! I don’t even know how ordinary people use their arms when they speak! I’m windmilling them like a five-year-old in a playground fight!

“The difficulty will be in discerning whether I am a catastrophic leader, a leader presiding over a time of catastrophe, or both. Still, it’s all the same in the end and I’ll get paid.”

Mary Fisher of Durham said: “Shit, I reckon. But I’ll still vote for her because there’s nobody else.”