My colleagues don’t realise, but I’ve overheard them arranging a surprise birthday party for my 60th, even though I asked for no fuss. Do you think it would be fair for me to return the surprise by shouting that I despise every last one of them and wish they’d leave me the hell alone?

I’ve discovered recently that surprises aren’t always a good thing. For example, telling my granny that Last of the Summer Wine is not a reality show and that David Essex is now bald and ugly nearly finished the old buzzard off. Nor did my parents enjoy it when I jumped out of the wardrobe and interrupted daddy naked-wrestling mummy on the bed. However, I’m sure my teacher will be elated when she discovers the petrified dog turd we hid in her handbag yesterday when she wasn’t looking. We’ll just have to wait and see. 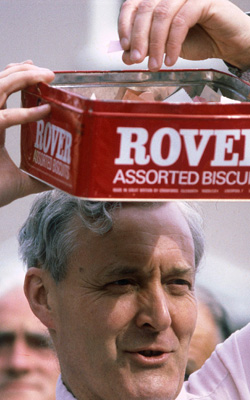 A BIG tin of biscuits bearing a stirringly patriotic design will be opened by the public in less than 72 hours.

Bought from a supermarket for an exorbitant price, the tin is impressively sized and is believed to contain all kinds of very tasty chocolate biscuits as well as some less pleasant pink wafers.

The British people have said that the tin of biscuits is nearly the most exciting thing about the diamond jubilee weekend, second only to getting shitfaced on Thursday night and not stopping until Monday.

Mechanic Julian Cook said: I dont know much about the royal family  is the Queen the boss one, or Fergie? – but I do know there are very few occasions in this world important enough to be marked with biscuits in a tin.”

Teacher Nikki Hollis said: The presence of assorted biscuits encased in metal makes this weekend as exciting as Christmas. Will there be good telly too?

Marketing manager Mary Fisher agreed: I like those honeycomb ring biscuits they do with chocolate stripes, and I plan to stuff them in my face while shouting God save the Queen. Do you think shell be happy with that, or should I wave a flag as well?

The biscuits are the only aspect of the Diamond Jubilee widely understood by the British public, who are confused about why the Queen has given them a day off when she could have given them stamps or money.

The widespread street parties that marked the Silver Jubilee in 1977 are not expected to be repeated because nowadays everyone hates their neighbours.