Being one of the 1% of the male population who hates football, I was most disappointed to discover that the One Show is off air for a fortnight due to the European championships. How is a red blooded gentleman expected to relieve the day’s tension without Alex Jones and her adorable Welsh cleavage?

The other evening, I was supposed to be in bed asleep, but I was totally buzzing from having eaten a packet of Skittles and half a pound of Millions after brushing my teeth, so I snuck downstairs, hid behind the sofa and spied on my Daddy watching the football whilst working through my sugar come-down. Although it was pretty boring watching little men running around a field, I did pick up some excellent spectator vocabulary, including ‘you fucking French garlic wankers’ and ‘play him wide you Scouse bastard’ and ‘come on lads, get into this shower of shite’. I can’t wait to test them out from the sidelines of the sack race at sports day next week. 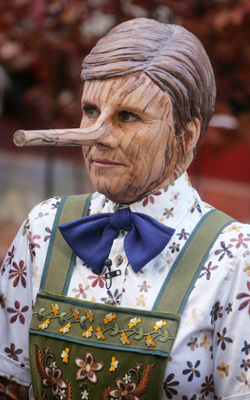 NICK Clegg has instructed Liberal Democrat MPs to no longer give any indication of noticing anything.

Party whips will monitor staff for their pupils dilating in light, shivering in cold conditions or flinching in the street when passing members of the public call them spineless, duplicitous pools of excrement and throw coins at them.

After being given permission to leave his desk and speak, Nick Clegg said: I think a coalition involves a certain amount of disagreement and so far weve thought its probably best if we pretend absolutely nothing is happening.

“However once we’ve been told the government’s position we’ll know whether to shake our head disapprovingly or not.

All thats left now is to have all of my colleagues sealed in Carbonite with their faces frozen into an expression of mild concern and powerless resignation to make our position absolutely clear.

Clegg’s announcement follows growing concern about the activities of the wooden MP Huntocchio, which have prompted his maker Gepetto to begin carving a new MP in the hope this one will grow up to be a real boy.

The childless carpenter had hoped that Huntocchio might be taught the value of telling the truth after being turned into a braying ass and being swallowed by an enormous media organisation.

But the white-haired git manufacturer said: Its hard to nurture good little cabinet ministers when all youve got to offer them is the possibility of gaining a soul, which seems pretty paltry compared to someone with five billion pounds in his back pocket.

I might see if ITV are using the puppets they have in the football idents, as the Gullit one has a friendly face and the Hodgson one looks like he could turn into a kindly old man one day, rather than a backtracking pile of arsehole.