Are you better than your neighbours?

IT’S a question every Briton has asked themselves – am I superior to those bastards next door? Take our test and find out.

How would you describe your neighbours’ garden?

1. Fairly average with a greenhouse and some ornaments.
2. Complete shite compared to mine with its pagoda-style gazebo, split-level pond with mini-waterfall and bespoke triple-creosoted cedar ‘outdoor storage unit’ featuring double doors for improved bike access.

What sort of car do your neighbours have?

1. A typical family saloon.
2. Some pathetic Renault hatchback that looks like it could barely overtake a mobility scooter, unlike my mighty Ford Focus ‘Zetec Edition’ which is obviously in a totally different class.

How successful are your neighbours’ children?

1. I think one of them is an accountant.
2. One collects trolleys at Asda and the other owned a computer shop that went bankrupt. Their failure gives me a warm glow of pride when I think about my own kids, who are all estate agents.

When you surreptitiously peer into your neighbours’ living room in the evening before they close the curtains, what are they doing?

1. Watching BBC news or The Blue Planet.
2. Being too poor and behind the curve to enjoy season 23 of a fantastic Netflix show like L is for Lesbian Undead.

Mostly As. Disaster! Your neighbours might be doing slightly better than you. Go and buy something expensive to establish your superiority, like one of those massive camper vans with a little car attached to the back.

Mostly Bs. Congratulations! You are much better than those pathetic tossers next door. Stand in the front garden and treat yourself to a well-deserved sneer, while hosing your lawn like a dog marking its territory. 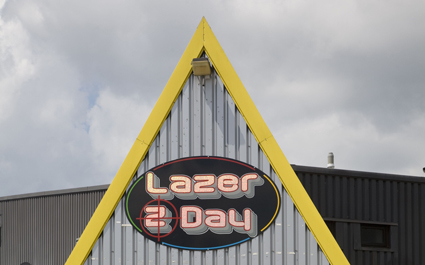 The seldom-seen Corbyn was spotted shouting at an eight-year-old child who had deactivated his laser pack in the airlock.

A Labour insider said: “The obvious thing for Jeremy to do would be to make a bold, decisive statement so the public know where Labour stands on the carnage that is Brexit, but you know Jezza, he’s a bit of a maverick.

“It’s a little known fact that Jeremy loves Laser Quest, but he’s very passionate about it. He certainly can’t be accused of sitting on the fence when it comes to nuking newbies in the Battle Zone.

“He’ll be back in work sometime in January, we think, although I know he also wants to check out Wookey Hole and has a voucher for Chessington World of Adventures.”

“But Father Christmas wouldn’t have used words like that.”