On this day I, King Leonidas, have come to Adventure Kidz soft play complex  where the heart of a true warrior is forged. This is Sparta.

Once inside, I remove my helmet for it is stifling and narrows my vision. I remove my shield for it is heavy, and throws me off-balance. I remove my shoes, for there is a big picture of a shoe with a cross through it. And then I run.

To my left is the ball pool. It is but an appetiser for a son of Sparta. I laugh in its face as I dive-bomb in, thrashing its coloured balls asunder. Some puny adversaries can flip one or two balls onto the carpeted area nearby, but a Spartan warrior can get them as far afield as the cafe, front desk, even car park.

Next, I infiltrate the toddler area – normally barred from intruders by a formidable gate system. I wait for a feeble-minded patrolman to leave it unlocked, then advance. Once inside, I raze to the ground any structures higher than two or three soft-bricks. Any structures of military value, such as forts, I save for occupation. It will be from their secure concealment that a ravenous king can indulge in activities normally taboo in the battle-zone, such as eating Quavers.

With a satisfied belly, I can deal with uprisings. To make an example, I march one particularly mouthy rebel up the perilous climb to the highest target of all: the ‘giant death slide’. I dangle him by his ankles from its dizzying vertical drop and ask him again if he preferred things the way they were before. Ignoring his pleas, I cast him down to oblivion. There is no place for whining in Sparta.

True warriors require to be engaged in conflict for many hours at a time and, with the toilet facilities being literally over 800 miles away from the trampolines, I now appear to be sitting in a suspicious smelling puddle. But it was definitely not bold Leonidas who made this mess, no way. It was definitely Xerxes, because he is a stupid face baby man who is still in pull-ups.

As I leave the war zone victorious, I decide I must be rewarded. Who will buy me this chocolate doughnut? No one is stepping forward which confuses me because as Leader of Free Sparta, I deserve it more than anyone else in the world. I start screaming with every fibre of my being. A destroyer of Persia has lungs like exploding volcanoes because within seconds I am the proud owner of not just a doughnut but a Yazoo as well. Tonight I feast with the gods! 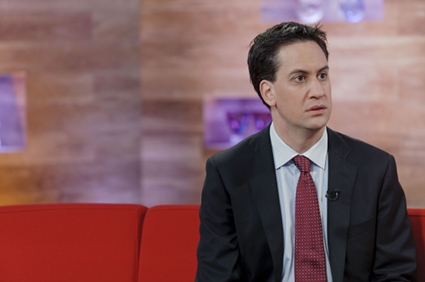 ED Miliband is to deny you the right to make a cretinous, ill-informed choice about Europe.

Writing in the Financial Times, the Labour leader there was ‘no way you are getting anywhere near this’ if he has anything to do with it.

He added: “I have travelled all over Britain talking to people about the EU and it is perfectly clear that you don’t know the first fucking thing about it.

“Most of you seem to think it’s about Abu Hamza and cucumbers.

“I was talking to this particularly dense woman in Peterborough and she just kept going on and on about cucumbers. Eventually I screamed, ‘shut up!’ right in her face. And then she chased me into a park.

“So, anyway. Too important. You’re all idiots. Forget it.”

The Labour leader also said that he was going to take more of your money ‘because you spend it like a child’.