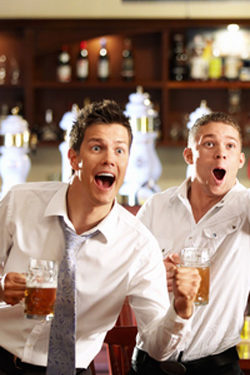 ENGLISH pubs will become the worst places in the world later today, it has been claimed. And seconds later, they will be sad

According to Institute for Studies data, the fact that England cannot manoeuvre a football will fully re-establish itself in the brain stems of the assembled beer processing units after 30 minutes of play. At this point the average pub will become slightly less pleasant than a piss bomb exploding in a skip full of rusty forks.

Landlord Wayne Hayes said: There must be some pleasanter way of bringing in punters than by screening football. Perhaps some sort of stage show involving my wife pleasuring terriers.

The drunken jeering, the misplaced sense of entitlement and the pervading fug of prejudice is like being in the House of Lords with a fruit machine in the corner.

Meanwhile, most England fans have said that in the extremely unlikely event they win Euro 2012, it will not compensate for having watched hours of Adrian Chiless face.

The scrotum-alike has already had to present matches from inside a perspex case to foil Roy Keanes repeated attempts to beat him to death with his own ribs. Now many viewers have started exploring alternative Chiles-free pursuits.

Football fan Roy Hobbs said: Rather than hearing a ballbag witter on in what appears to be the beer garden of a fun pub, Ive started listening to opera. Its actually quite, quite beautiful.

“A fiery disk plunging into a shimmering horizon and painting the evening sky a palette of rich titian and crimson makes you realise theres more to life than Adrian Chiles making puns about foreigners.