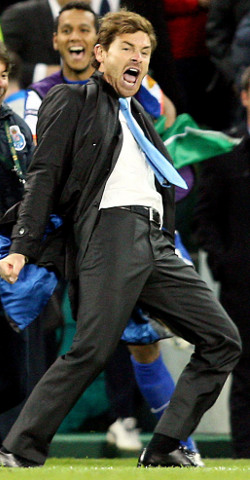 THOUSANDS of tattooed Chelsea supporters have locked themselves in their room listening to Justin Bieber after the appointment of André Villas-Boas as manager.

The 34 year-old greeted fans at the gates of Stamford Bridge that were adorned with cards, poems and teddy bears from the club’s legion of adorable, potbellied racists.

Several police officers were injured in the resultant crush as the screaming throng surged forward to try and touch Boas’ face.

Corpulent taxi driver Wayne Hayes said: “AVB will give the club a fresh direction and some youthful enthusiasm as well as dreamy, tousled hair and eyes you could just drown in.

“Roy Hobbs reckons he went on holiday to Portugal last year and met André at a nightclub and they did shots together but he’s such a lying bitch and everybody knows his family are povvos that can’t afford to go abroad.”

Boasmania also hit the club’s merchandise shop, where hastily-manufactured posters featuring a shirtless Boas were snapped up at £50 a time and old Ancelotti stock was vandalised.

Shop manager Charlie Reeves said: “It hasn’t been this mad since Mourinho arrived and we had two hundred blokes camped outside the doors for a week waiting for our range of Jose pencil cases to come out.

“It’s been a nightmare locking up this evening – I don’t know if you’ve ever had to roll three overweight builders who’ve fainted out onto the pavement but it’s no picnic.”

The Portugese manager has thanked the fans – who have now dubbed themselves ‘The Chelsea Boas Hunters’ in his honour – and said that he will love them forever, or at least until Abramovich gets bored and feeds him to his killer whale.