Is this a hangover or have you actually died and gone to hell?

YOU drank too much last night. That goes without saying. But was that the sun coming up you remember, or was that radiance the eternal inferno of the underworld? Take our test to find out…

When you woke and crawled to the kitchen to chug two pints of water, what did you see?

A. Nothing. Just the kitchen. And my prick of a neighbour mowing his lawn which is perfect when you’ve got a throbbing head.

B. The kitchen, but somehow not? As if it was lit by distant orange flames, and the gurgle of water seemed to say ‘you are damned’ over and over again? Also your prick of a neighbour was mowing his lawn.

When you lay down heavily on the couch to watch The Simpsons, what happened?

A. Nothing untoward. I mean it wasn’t a good early one or anything, but you coped.

B. Something was up with the TV’s colour balance, because it was all tinted red? And the title sequence was the whole family falling into hell and being graphically tortured, which seemed unfamiliar. And it was that terrible Wife Swap episode with Ricky Gervais.

When you summed up the courage to check your phone, what messages had you received?

A. None. Which is honestly more worrying than loads. Whatever you did must have been really, really bad.

B. A torrent of messages, many from unfamiliar numbers or people you had thought were dead, detailing what a loathsome worm you are and how badly you’ve hurt those you care about.

A. No way are you opening the curtains, not with this head.

B. No way are you opening the curtains, but there’s this sort of.. evil light coming through the gap? And you can hear constant screaming. Not happy screaming.

You are still alive, which on the one hand means at some stage you’ll need to leave the house for Lucozade and a massive bag of Doritos, but you will be able to have another drink later.

You are dead. Welcome to Hell.

England 'can win World Cup if you're pissed enough' 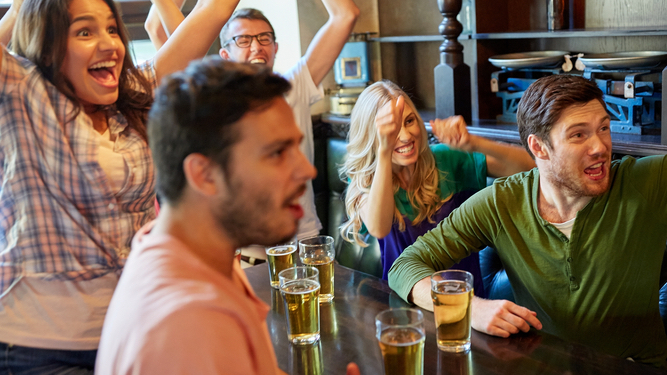 THE England team has a very good chance of winning the World Cup if you have consumed enough alcohol, it has emerged.

Although England was not initially expected to claim overall victory, supporters have discovered their team’s ability massively increases once they are pretty shitfaced.

Fan Roy Hobbs said: “At first I thought, ‘nah, not a chance’, but now I’ve drunk eight pints of strong lager I reckon they can do it. It’s like 1966 all over again.

“I was clearly underestimating our invincible national team while sober. All I have to do now is remain completely bladdered until the end of the final and victory is in the bag.”

Fellow supporter Donna Sheridan said: “We can easily beat teams like Germany and Brazil. All we need is a bit of luck, like all their best players somehow falling and breaking their legs on the same day.

“That could happen. It could. Are you going to the bar?”

Former England player and soccer pundit Tom Booker said: “I’m afraid we have to be realistic about England’s chances, and in reality we might only beat Germany 10-nil in the final. D’you know where the toilets are?”