LANDLINES are to be axed by the year 2025. Here are five things you used that humble copper wire for before the internet came along.

You’d see an advert for Clubcall on Teletext announcing that your Fourth Division team was ‘finalising Shearer deal’. You’d call the premium-rate number and eventually discover they weren’t signing Alan, but someone called Terry Shearer, as physio. Then you’d have to explain the subsequent £30 charge on your dad’s itemised BT bill.

You’d come in from a disappointing night down the pub, and between Tour of Duty and Highlander: The Series, see an advert promising an instant, sexy phone party with ‘like-minded fun people’. In reality, it would just be you and some bloke from Redditch talking about his job selling PVC windows, because all the genuinely fun people were out at real parties.

Before Spotify, if you wanted to hear a song you liked, you had to either wait for it to come on the radio, get on the bus into town and buy the record, or call Dial-a-Disc. It was too expensive to listen to the full track on your landline, so you’d end up feeding all your pocket money into the local phone booth, which at worst had been smashed up by yobs and at best was full of piss.

Before the days of mobile phones, if you didn’t have a watch you’d have to get up, walk to the hall where the landline was, dial a long number on a rotary phone and listen to an automated voice tell you the hour. It was an arduous process, and would have been quicker and cheaper to pop into town for a Casio.

Maybe it was due to an atmospheric anomaly or too much static, but you’d often hear other people talking down the line. Usually the conversations were garbled or boring, but occasionally you’d really luck out and hear a couple engaging in sex chat.

The seven stages of disappointment in a new streaming show 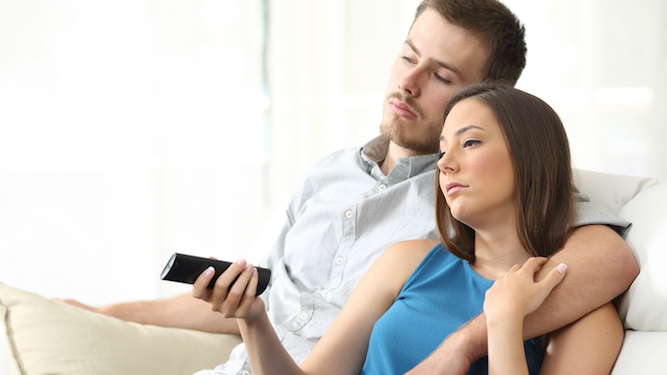 EXCITED by the latest much-hyped show on Netflix or Amazon? Here’s how you’ll gradually regret getting sucked into it.

The first episode will open with something thrilling: a terrifying abduction, parallel universe or massive battle. I must watch this, you think, wrongly. It’s just where the producers have chosen to spend lots of their budget to get their hooks into you.

You’ve got the beers and pizza in, and episode 2 is okay but not quite as thrilling. It will, however, end on a cliffhanger, so you’re still onboard, you naive fool.

Whether it’s Nazis taking over the United States or some historical evil emerging again in a Mid West town, the makers of the series will take time to spell out what happened in case thick viewers get confused and turn off.

A secondary character will die. Ideally in a shocking way, eg. their head explodes or they boil to death in a vat of glue. You’re not that bothered, frankly, but there’s loads of social media buzz and the Guardian will have a blog about it.

Now the story is well underway and you’re signed in, the writers can take their collective foot off the pedal. There’ll be endless scenes of people chatting or describing their childhood. You could skip these, but something important might happen. It won’t.

After nine increasingly boring episodes the show becomes exciting again. However you’re now so f**ked off with it you’ve been switching to YouTube to have a good laugh at skateboarders crushing their testicles.

Inconclusive ending designed to set up a second season

The need for a lucrative second season will be pretty blatant, eg. a character saying ‘There may be other underground laboratories out there.’ And as a rule of thumb, if a character does not clearly die, they are coming back in season 2.