JEREMY Corbyn is to play to packed stadiums across the world, reading out bits of economic policy from the Labour manifesto.

Tour manager Nikki Hollis said: “This is the biggest production I’ve handled since The Rolling Stones. Jeremy wants a 150-foot mechanical Nye Bevan and a group of 200 miners singing a medley of angry folk songs.

“Fortunately his rider is just a jug of tap water, a jam sandwich and an old woman he can empathise with.”

Fan Tom Logan said: “I’ve got front-row seats for the London gig. I can’t wait to stage-dive while he reads out the bit about international trade agreements.”

Tour merchandise will include ‘J-Co’ branded pushbikes, cardigans and fake beards, while the support act will be Guardian intern Owen Jones reading out a 4000-word essay about renationalising British Airways. 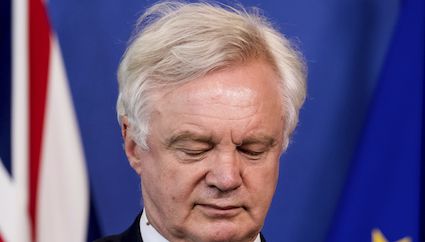 ALL of David Davis’ Brexit talks have been with a random Belgian man he mistook for EU negotiator Michel Barnier, it has emerged.

In an Andrew Marr interview, Davis revealed a mix-up with directions led him to repeatedly visit a Nissan showroom in Brussels and talk to a salesman called ‘Pierre’.

Davis said: “It was an easy mistake to make because he looked a bit like Barnier and it’s hard to tell what foreigners are saying, although I did think it was odd his office was full of cars.

“When I used my impeccable French to say ‘Bonjour, je suis le Brexit man!’ he appeared to recognise me and took a selfie, so naturally I assumed I was with the EU’s top negotiator.

“I began discussing Brexit at length, pausing only for Pierre to show cars to people. With hindsight that was strange, but I assumed it was a negotiating tactic designed to unsettle me.”

He added: “On the third day he said ‘David, you should really only come here if you want to buy a car’, so to keep Brexit on track I have bought a 1.4 litre Nissan Micra. It’s all good.”