THOUSANDS of British families are celebrating Christmas by watching some girl-on-girl action.

The shows, based on old German tales where aberrant sexual desire is thinly concealed by metaphor, let audiences pretend the dark, unknowable longings within us all are just a bit of fun.

Director Roy Hobbs said: The main character is a girl dressed as a boy, but a sexy boy in knee-high leather boots and fishnets.

Shes trying to win the heart of a girl in big flowery dresses and ample cleavage – one of those Barbie fetish types.

Theres a eunuch, usually played by a man emasculated by years of prime-time ITV.

And theres a grotesque parody of womanhood, played by a flamboyant homosexual, whose vanity and outlandish costumes reminds the audience that femininity is ridiculous and wrong.

The villains are evil, sexually predatory women over 40 who are humiliated and then robbed.

Dad Bill McKay said: I get to see an EastEnders actress grind up against the girl who does the traffic on the local radio.

Thats worth the kids wetting their beds for the next few months.

Queen to confirm she is immortal 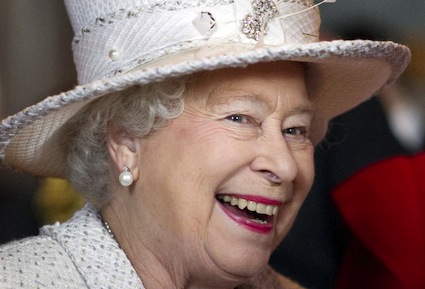 THE Queen will use her annual Christmas message to announce that she will never die.

The monarch will tell Britain that she has developed a condition known as Methuselah Syndrome, caused by generations of grotesque inbreeding and being immensely wealthy.

Professor Henry Brubaker, of the Institute for Studies, said: “Beyond immortality, sufferers can lead a perfectly normal life.

“With the right emotional support and a steady diet, the Queen should remain healthy at least until the universe begins to contract and conditions become unsuitable for existence as we know it.

“Beyond that she’ll just float about in an infinite bubble of nothingness.”

Her Majesty will also confirm that Prince Charles has inherited the syndrome and will therefore get to watch her be Queen forever.