YOU’VE settled in for a classic with the kids only to be confronted with an excruciating, lengthy f**kfest you’d forgotten about. These movies hide their sexy secrets:

Grease is a PG movie of catchy songs, 40-year-old teenagers, true love and and, of course, Rizzo and Kenickie discovering his rubber’s broken and having unprotected sex, followed by pregnancy. Be ready to explain why Rizzo’s so jubilant at the end.

For whatever reason, the nude stand-in scenes with Martin Freeman and Joanna Page don’t stick in the mind like Hugh Grant dancing around Downing Street or Emma Thompson weeping. But they’re there, they’re awkward and they run through the whole movie.

The kids are verging on teenagers, they’re not totally naive, you’ve remembered the diarrhoea scene and you’re convinced you’ll all find it hilarious together. So you turn it on and the first five minutes Kristen Wiig and Jon Hamm going at it. And not in a ‘sometimes, when two people love each other very much’ way. Just f**king. 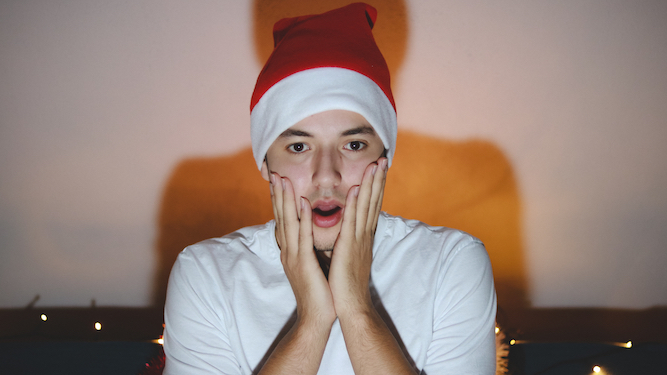 A MAN has opened the first door on his advent calendar to reveal a yawning black consumerist void demanding to be fed with money.

Tom Booker bought the advent calendar to count the days until Christmas, but instead is staring into an infinite abyss of capitalism which wants everything and gives back nothing.

He said: “I thought it would have chocolates in. Cocoa-dusted Belgian truffles, maybe.

“Instead the cardboard door opened and revealed an endless freezing starless night. But somehow the depthless oblivion was writhing, and it spoke to me. ‘Feed me’ it said.

“It wants cash, it wants vouchers, it wants luxury goods. It wants Boots three-for-two offers. It wants tubs of Celebrations and bottles of Bailey’s and pigs-in-blankets and wheels of Stilton.

“But no matter how much you tip in there, it swallows it and then demands even more. I can’t keep up. I’m already well into my overdraft and it’s only December first.

“It says it’s the real meaning of Christmas. That can’t be right, surely? But it doesn’t feel like it’s wrong.”