Five things from the seaside to go straight in the bin

A DAY trip to the seaside can be fun, but also burden you with a lot of unwanted shit. Chuck these things immediately:

With the pandemic at the forefront of parents’ minds, a beach with the tide out is essentially a Western wet market. The assorted bits of crab your kids have lovingly brought home may as well be pangolin scales and bat claws. Ditch, disinfect, and give everyone a lateral flow test immediately.

It would have been cheaper to buy the rights to Peppa Pig than to spend an hour pumping pound coins into a grab machine with the grip strength of an arthritic grandmother. Discretely pop it in the bin when you get home and spin your child some sentimental bullshit about poor Peppa missing her family.

Crawling around in the sand and paddling near sewage overflow pipes are what seaside days are all about. Until you come to wash the swimsuits and they’re full of ice cream, seaweed, used sanitary towels and more sand than was originally on the beach. Washing them will only clog the drains. Throw away and start again.

For three minutes the most important thing in your kids’ lives are nodding dogs for the car. Then it’s baseball caps that hold drinks, then sticks of rock with their names through them. Tell yourself you’ll keep the receipts, instantly misplace them and bin it all when your children lose interest in the moment they get home.

You’re 37 seconds late back to the car and you’ve got a parking ticket. Get angry, say there’s no way you’re paying it and chuck it straight in the bin. Feels good now but you’ll regret it when a County Court Judgement drops through the door two months later.

The guns, and four other nicknames twats use for parts of their body 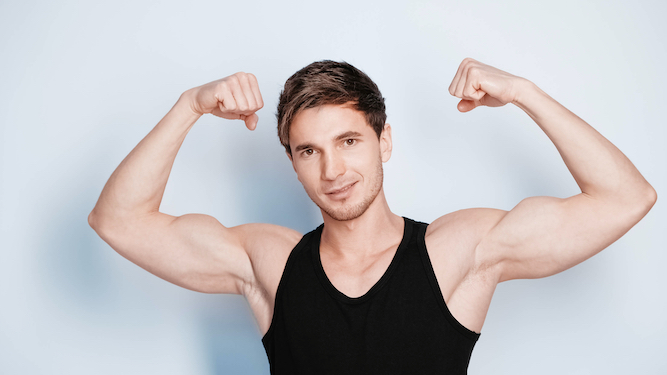 A CERTAIN type of arsehole can often be heard using these ludicrous nicknames for various parts of their anatomy:

This is what men who’ve decided to base their entire persona around lifting weights call their legs. Aside from sounding like a twat, referring to your legs as if they’re components of a steam train’s engine is rather grandiose as except for ‘leg day’ at the gym, they are largely used to walk to the shop to buy more protein powder.

This initially sounds kind of cute, until you think about it too hard and create a terrible mental image of two over-sized testicles stuffed into a bra. Whether female or male, anyone who thinks the word chesticles is funny also enjoys getting shitfaced on cocktails called Screaming Orgasm at All Bar One.

Congratulations, you spend your spare time lifting large pieces of metal so are now desperately trying to draw as much attention to your arms as possible. You may joke that you’re in possession of a pair of firearms, but the only thing those guns are capable of mowing down is the small amount of personality you still have.

Buns, booty, badunkadonk… there are many stupid slang names for the buttocks but moneymaker has to be one of the most nonsensical of all. Are people who use this genuinely suggesting that people hand over cash to look at their arse? Or are they just egotistical twats? Most likely it’s the latter.

A go-to for bragging arseholes who think that comparing their genitals to a large jungle snake makes them seem more appealing to women. If you’re saying that your penis can grow up to 17 feet in length and swallow an adult deer whole, you’re not going to find many people queueing up to blow you.