NOT all greatest hits albums are created equal. For every Abba Gold or Greatest Hits by Queen, there are more than a few blatantly padded out with filler. Like these.

Get past Against All Odds and Another Day in Paradise and you’re in a wasteland of bland Mondeo driver tunes. The former frontman-who-actually-sat-at-the-back even re-released this album to cash in on In The Air Tonight being made somehow relevant by a giant gorilla doing the drum part to flog chocolate. Can’t blame him, he’s had a lot of divorces to pay for.

Leather-clad boiled eggs the Fairbrass Brothers are a pair of tits and two-hit wonders. Did I’m Too Sexy and Deeply Dippy merit a greatest hits? The thrusting goons became more sinister in recent years – defying lockdown, refusing to wear masks, spreading anti-vax sentiments and appearing on the livestream of a neo-nazi. At the same time as trying to release a comeback single. Great strategy.

Ant and Dec – The Essential Collection

Considering the only song anyone remembers is Let’s Get Ready to Rhumble it’s pretty impressive, or tragic, that these lads have five, yes FIVE, greatest hits albums. ‘Essential’ implies their other compilations aren’t vital to own, but you’ll easily get hold of a copy in your local charity shop or fly-tipped down a side street, and they’re all identical. Or just download ‘Rhumble’. It’s only 79p. And no, we don’t know why it’s spelled like that either.

Hucknall and his cronies somehow manage to condense five studio albums-worth of material into two half-decent songs surrounded by a load of old toss. What keeps you hooked is Mick’s pure charisma. Just kidding, he’s as unbearable as f**k. Cleverly, they leave the big hit Fairground until the final track, probably to make sure you don’t turn it off during the 45 minutes of shite that precedes it. Or it’s in honour of Mick himself – who now looks like a toffee apple rolled in some candy floss.

One thing Jay Kay can’t pull out of his giant hat is enough good music to justify a greatest hits album. There’s Virtual Insanity, which everyone knows, and after racking your brain slightly, Space Cowboy and Deeper Underground. After that you’ll be drawing a blank. Just like the poor sod at the record company who had to put the greatest hits album together. 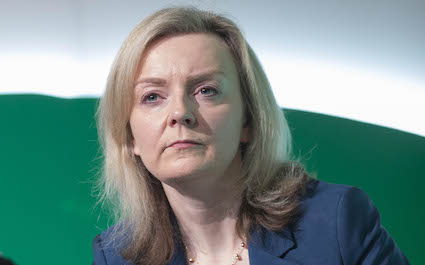 WONDERING who will replace Boris Johnson? Look forward to one of these five types of awful person leading the Conservative party.

Members of the cabinet are the front runners here. Raab, Patel and Sunak will spend the weekend plotting to stab each other in the back, only to be beaten by Nadhim Zahawi, who’s already proved he’s enough of a bastard for the position. It takes big balls to accept a job from your boss then tell him to resign. Or perhaps just being a twat.

Remember Penny Mordaunt of Splash fame? The former international development secretary could be back on our screens, although in a much less entertaining capacity. In the unlikely event of Nadine Dorries putting herself forward as leader, Penny has the advantage of dicking about on a diving board being far less embarrassing than eating crocodile knobs on I’m A Celebrity.

The Conservative party is brimming with obscure upstarts desperate to get their claws on the levers of power. Could the country soon be run by MP for Basingstoke Maria Miller? That would be a lucky dip. Or what about Steve Baker, only really known to politics buffs? He’s a Brexit nutter who proudly considers himself ‘anti-green’, so frankly he may as well just become PM right now.

If there’s one thing Labour should fear, it’s the Jeremy Hunts of the world who could convince the public they aren’t running the country into the ground, forcing Labour to replace Keir Starmer with someone even more boring. Anyone vaguely competent will look like even better in comparison to Boris Johnson, and it can’t be that hard not to be half-cut all the time and rambling about Peppa Pig.

Truss would be the UK’s first political leader who could be distracted by a laser pointer while delivering the most excruciatingly awkward speeches known to man. Nothing would get done under her watch because she’d insist on posing for terrible photos every five minutes. The entire nation would live in terror of another speech about cheese.