Ground Force and other 90s shit they'll bring back next

THE return of scrunchies and Changing Rooms apparently means the 1990s are back. What other awful 90s dross will be next?

With the return of Changing Rooms, the stage is set for Titchmarsh, Dimmock and Walsh. Sadly no one can afford a house with a garden anymore. So the new episodes will see their 20-strong team all pile into a 8th floor flat to overhaul a couple of plant pots and a window box.

The death of the high street means lots of derelict stores could reopen as a ‘Woolies’. For the authentic feel they’ll have to get the carpet just as sticky as it was in 1997. Plus, in the world of Covid-19 there’s never been a better time to open a shop whose best feature is the extremely hygienic pick and mix.

A TV classic they’ll probably bring back to cash in on our public pride after Tokyo 2020. Many elite Olympic athletes have a short shelf life, so they can become our new Gladiators. Goodbye Adam Peaty – hello ‘Neptune’. So long Max Whitlock – you’re now ‘War Horse’. And farewell Tom Daley – here comes ‘The Budgie Smuggler’.

The natural nerdy successor to vinyl – except with VHS everything looks and sounds much worse. Within the next year expect a bunch of cassette shops and ‘fairs’ popping up. Selling genuine original VHS tapes to middle-age blokes with patchy beards and wonky glasses. Face/Off will cost £70 and it’ll be £200 for a Lion King still in its shrink wrap.

The font of all knowledge in the 90s. From US Presidents to volcanos, it had everything. Kind of. Wikipedia has started begging you for money every time you go on it – which makes us all uncomfortable. So surely there’s never been a better time to reboot this CD-ROM classic.

The game you never quite understood on your PC is surely in line for a big budget Hollywood revamp. Dwayne ‘The Rock’ Johnson will star as a bomb disposal expert racing against time to defuse dozens of mines. If successful, movie moguls will ask Spielberg to adapt Snake from the Nokia 3310 next.

Why I was too busy to make one f**king phone call, by Dominic Raab 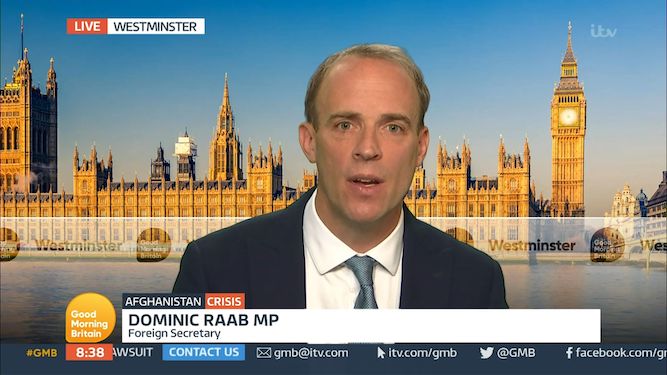 From the office of Dominic Raab, foreign secretary for the time being.

Should I have made one quick phone call which might have helped translators evacuate Afghanistan? We’ll never know. But let me explain why I was too snowed under to do it.

First of all, making a phone call isn’t as simple as pressing some buttons and saying words into a mouthpiece. You’ve got to think about what you’re going to say, psych yourself up, and if you’re on a mobile you’ve got to find some good reception. No easy feat, I’ll think you’ll agree.

Critics will say it would have taken two minutes to pick up the blower and bark some instructions, but there simply wasn’t room in my packed itinerary of waking up late, strolling along the beach, and topping up my suntan.

Also I was in a holiday mindset, which would have impaired my judgement. There’s a real chance I might have phoned up the Foreign Office and mistaken them for the room service of the Cretan five-star resort I was staying at.

Could you imagine if I’d rung them and asked for another boiled lobster to be brought out to me as I dipped my toes into the cool, refreshing waters of the Mediterranean? They’d probably think it was coded permission to launch nukes. So if anything it’s fortunate I did absolutely f**king nothing.

Look, if I’d done one iota of work on my holiday then it would have set a precedent. Do you want to be on your boss’s beck and call while you’re trying to kick back in your shitty holiday cottage? Didn’t think so. So stop complaining.