'I have no son': What to do when your 13-year-old gets into Warhammer

WHEN your son announces that he would like to go to the Warhammer shop, your first instinct is to disown him. And that’s correct. Follow it with these:

The Warhammer lifestyle might seem glamorous to a child, but you know where it leads. Scare him straight by showing him videos of 40-year-old men playing with meticulously painted Chaos Knights, men who have never known love or joy. Leave him in no doubt of the tragedy he will become.

Show him the cost

Not the cost to his corroded mind, body and spirit when he is drawn into this dark netherworld, but the actual f**king cash price. £25 for a book of rules? £40 for a couple of robot battlesuits? These nerds are taking the piss.

The engine driving Warhammer’s success is their social scene: the fact that any loser, freak or sick monster can spend all Saturday in the shop, soaking in the bitter brine of geekdom until all other social options fall away. Tell the staff your son’s a shoplifter and get his photo behind the counter.

There must be carrot as well as stick, so spend Saturdays showing your son wholesome, manly hobbies, like having a Marvel Cinematic Universe marathon, building a Lego AT-AT together or playing videogames all day, like normal people.

Tell him a sobering story about your own youth

Kids think parents just don’t get it. Admit to him that you experimented with Advanced Dungeons & Dragons when you were 13 and you know how seductive it can be, but that was before they developed the Warhammer 40,000 strain which does untold damage to developing adolescent male brains.

Let him fill his room with tiny spiky army men called Adaptus Militarum or Necrons. Let him ruin his eyesight painting them. For most boys it’s just a phase and once it’s out of their systems they can go on to something more wholesome, like underage drinking and experimenting with their sexuality. You can only hope.

Woman in luxurious bath surrounded by candles bored as f**k 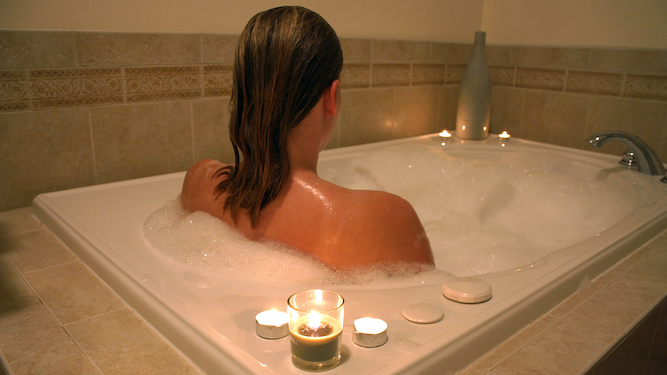 A WOMAN who ran herself a luxurious bubble bath to relax in got out after eight minutes because she was desperately bored.

Sophie Rodriquez, who thought she had been looking forward to a long soak in the tub all day, found that lying still in rapidly cooling water was actually really f**king dull.

She said: “The trouble is, once you’ve got over the initial brief pleasure of sinking into the hot scented bubbles, there’s not much to do.

“I read the backs of three shampoo bottles and a conditioner but quite frankly they are all much the same. Then I tried forcing a fart out to create a fun jacuzzi effect but only managed two very small ones.

“At this stage I was pretty much done, but I’d used a shitload of hot water so I felt I should stay in a bit longer. Even though the water was now tepid and visibly covered in dead skin cells that had sloughed off and were floating around.

“So I cut my losses, got out and watched put the news on instead. It was much more pleasant and relaxing.”