LES Misérables is leading the Oscar pack with nominations including best foreign-sounding film and best cockney accent in a French-based film.

This year’s introduction of new, more cosmopolitan categories including an award for the most unforeign-seeming foreigner is a riposte to those who accuse the Oscars of glorifying a handful of Hollywood movies.

Quentin Tarantino’s Django Unchained is up for longest film and best opportunity for white actors to use racial epithets.

Argo, directed by Ben Affleck and set in the late 1970 during the Iranian hostage crisis has been nominated for best excuse to feature cool actors looking cool smoking indoors and on airplanes.

It is also in the running for best storyline to rescue a feelgood ending from an otherwise disastrous episode in American history.

Kathryn Bigelow’s Zero Dark Thirty, about the killing of bin Laden is in line for both the most surprising ending and best use of numbers in a title to convey macho suspense. 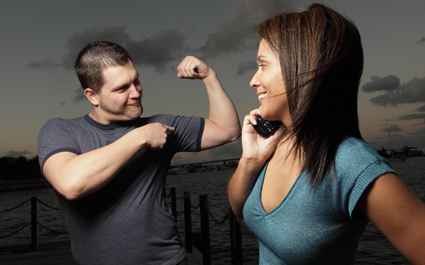 THOUSANDS are leaving Facebook because they want to get back into face-to-face bragging, it has emerged.

Ex-Facebook user Tom Booker said: “Pre-Facebook I would get together with friends in a cosy bar and subtly navigate the conversation towards how awesome I was.

“Somehow that’s much more fulfilling than digitally sharing a photo of me on a beach with a flamboyant drink, grinning and pointing at myself.

“When you’re in a room with people talking about your massive income, actually seeing their faces twitch with barely-concealed envy, that’s when you know you’re something really special.

“Online narcissism is just too impersonal.”

28-year-old Facebook quitter Emma Bradford said: “Last night I actually went to my local pub and boasted at everyone.

“They said some stuff back but I didn’t really listen. Who cares about them? It was brilliant, just like the internet except I got to physically dominate the room.

“Also, having just left Facebook I had one extra thing to show off about.”