A CRAZED lunatic has outraged sensibilities by beginning to watch a feature film at 9.30pm on a weekday night.

Tom Booker somehow managed to persuade his wife – who police are considering a hostage – to start watching Bohemian Rhapsody even though there was little hope they would complete viewing it before midnight.

He said: “I know it’s a bit late, but come on, it’s only a film. We can sit on the sofa and keep our eyes open that long, can’t we?

“Yes normally we’re in bed by half-ten but it’s only a four-day week and sometimes you’ve got to live a little. If we’re a bit tired at work, it’s hardly the end of the world.

“Let’s make a night of it. I’ve got the chips and dip out and I’ve lowered the lights. Let movie night begin.”

Wife Emily said: “We turned it off before 10pm, after we both woke up with a start 20 minutes in. He had fallen asleep with his hand in the hummus.” 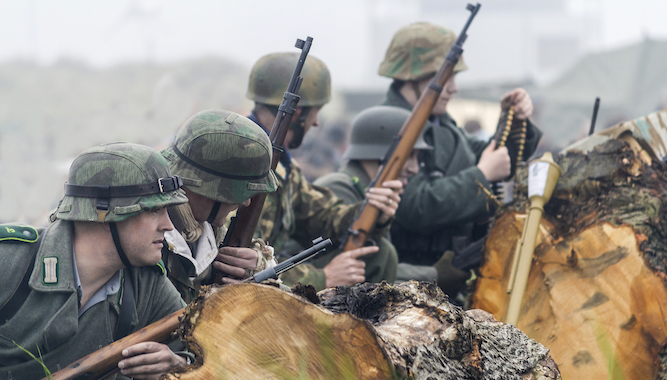 BACK in 1945 Britain beat Nazi Germany, with only nominal help from the USA and Russia. And today, there are more Britons who believe they would single-handedly defeat the Nazis then ever before. But would we?

Would we win… in Dunkirk?

Young Britons, seasoned in so many music festivals, would find the experience of being trapped in a supposedly idyllic coastal location with security trying to kick them off and no transport available boringly familiar and tediously easy to cope with.

Would we win… the Battle of Britain?

In 1940, pilots and their Spitfires took to the air and defeated the Nazi threat, buying their country crucial time. Today’s teenage pilots, trained by years of Xbox dogfighting, would be even better but the non-stop racist and homophobic invective they habitually spew at opponents would soon make them realise they have more in common with the Nazis after all.

Would we win… on the beaches?

Tens of thousands of young British soldiers would storm the beaches at Normandy, braving hails of bullets to fight back the only way they know how: by posting bullshit online. And though they would score significant victories, including the cancelling of a senior Nazi general for liking a Britain First post, ultimately they would lose.

Would we win… in Berlin?

If UK forces made it to the ruins of the German capital, they would find its bombed ruins so incredibly Instagrammable that the advance would slow to a crawl and snipers would have a field day. Hitler’s bunker would become as familiar a sight on Tinder profiles as Machu Picchu.

Would we win… overall?

We would fight bravely, nobly and largely ineffectively until America, waking up late to its moral duty to battle for what it believes in no matter what the cost, comes into the war on the Nazi side and crushes us completely.