Show really gets going in season two, says friend who assumes you’re fine to sit through ten hours of shit

A TV show is worth persevering with because it improves after just ten hours, according to a friend who assumes you have nothing better to do.

Friend Nathan Muir has recommended the American show, which is about the founding of Silicon Valley or something, while insisting that the initial ten hours of utter tedium should not put you off.

He continued: “Actually it’s more like the second half of season two when it picks up. But stick with it.

“The first season’s all setting up so you have to pay attention, apart from to the characters and plotlines they just drop completely, but I won’t tell you which ones because spoilers.

“But trust me, all you’ve got to invest is the equivalent of a couple of working days of your leisure time in something you’re not enjoying in the least, and it’ll properly pay off. 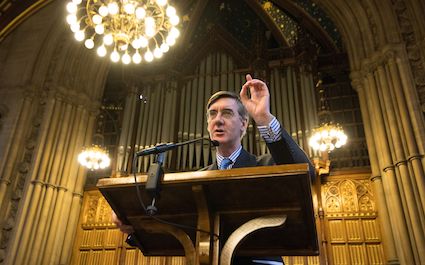 TORY MP Jacob Rees-Mogg believes that despite the prime minister’s attempts to appease Germany, Britain is once again on the verge of World War Two.

Listening to his wireless while the nanny put his six children to bed in the attic, Rees-Mogg believes the Teutons to be unabashed by the bloody nose they took at the hands of British Tommies in the Great War and its successor.

He said: “Rumours about the Colonies and the Orient beginning World War Three are so much twaddle. It’s the last one we’re on the brink of.

“The stormclouds are gathering over Europe and following the invasion of Poland the Krauts will take France by advancing with tanks through the Ardennes, which our generals will never expect.

“I have arranged for the railings of my London townhouse to be melted down to make Spitfires, the croquet lawn to be dug up to grow cabbages and a corrugated-iron shelter to be constructed at the bottom of the garden.

“Our pluck will be tested, yes, but the Empire shall prevail.”