THE BBC is bound by law to make a big f**king deal of the Jubilee, so here are six shows it’s shoe-horning the celebration into:

Can Jay Blades and the team fix the whole broken system of constitutional monarchy by which Britain is run when the Queen brings it in? No. So they edited that out, denied it ever happened, and are repairing a clockwork dancing Coronation biscuit tin or some shit.

Mick and Linda are preparing for the Jubilee when Charles and Camilla pop round. They bond instantly, Camilla loses Highgrove on a high-stakes card game, Charles admits he’s just given Lauren one over the Arthur Fowler Memorial Bench, a fight starts and everyone is miserable forever.

Instead of reporting actual news that matters, for example a government teetering on collapse or a country in financial crisis, the BBC’s news teams, respected the world over, will spend four days reporting meaningless monarchical pageantry as if it f**king matters.

Richard Osman and the team attempt to work out just what the point is of a country sliding into poverty maintaining a hugely expensive dynasty of useless inbreds like a pauper keeping a golden cage of jewel-adorned poodles. Can they do it?

The professionals and a celebrity line-up come together for a one-off show themed around Royal infidelity. Watch Katya Jones and Evan Davies as Mrs Simpson and Edward VIII, Ben Miller and Nancy Xu as Prince Philip and a Profumo sex party ‘hostess’, and a special surprise appearance by Prince William and a friend’s wife he’s knocking off.

A very special episode of Peaky Blinders jumps Tommy Shelby forward to the 1953 Coronation. The gang have the only warehouse full of colour televisions in the country and demand is booming, but Greek mobsters are moving in. Watch blood splatter against the screen as the Queen is crowned while Tommy severs jugulars with a straight razor.

Sleeping in airports or holidaying in Wales: Which will be your summer? 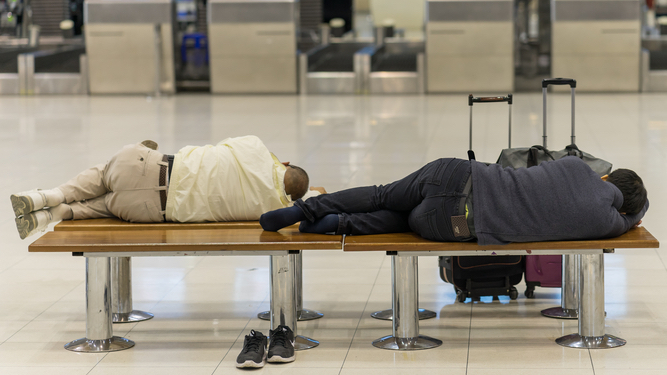 POSTPONED flights and bedding down in Manchester Airport is a grim way to spend half-term, but the only alternative may be a holiday in Wales. Let’s weigh the pros and cons of each.

Airports: A pretty good selection of food, from burritos to Chinese, or at Heathrow a Heston Blumenthal restaurant and a Fortnum & Mason oyster bar. Not much use to Brits planning to gorge on chips in Marbella, but a cheeseburger shouldn’t prove terrifyingly exotic.

Wales: Mostly fish and chips, fried ‘donuts’ and a Nando’s if you’re lucky. For eating out, dossing down on the floor of an airport wins hands down.

Airports: It’s safe to say the weather won’t be a problem, because there is no weather. Assuming the air conditioning is working, you can’t fault airports on this score.

Wales: Expect rain. Lots of it. Ever seen the Ray Bradbury film The Illustrated Man, where the astronauts are driven completely insane by non-stop rain? It’s a lot like that, except you can take cover in a cafe and feel unpleasantly clammy for a bit of variety.

Airports: Not ideal places to stay, designed as they are without beds or en suite bathrooms. Also day trips aren’t really possible due to losing your place in the queue. (Pro tip – they’re just going to cancel your flight anyway.)

Wales: Also not a good place to stay, if you’re in a B&B that looks like Winston Smith’s pad in Nineteen Eighty-Four, a hotel with a shitty nightclub next door, or a caravan where every day is a Sisyphean struggle of folding stuff away just so you can eat your f**king baked beans. Wales wins, but only because of actual beds.

Airports: Actually have a surprising number of tourist places of interest, if you look hard enough. At Heathrow you can visit bits of the airport where Love Actually was filmed, or sit on a toilet Liz Taylor may have shat upon in her heyday.

Wales: Also has places of interest, but generally a bit rubbish. Often a mountain/big hill or boring museum. If you’re fascinated by the lives of Methodist slate miners you’ll be gripped, otherwise you may as well take the kids to Heathrow’s equally dull runway where Concorde made its historic 1976 inaugural flight.

Airports: It’s impossible to have a beach holiday in an airport. With airlines that haven’t bothered to employ enough people, and a government that doesn’t give a shit and is making the situation worse, installing artificial beaches and wave machines in airports might be the only solution for years to come.

Wales: Loads of great beaches, on the rare days it’s sunny and you can go mad and take your North Face jacket and fleece off. Fun whatever the weather for the kids, who can explore the rock pools and befriend a dead crab.

Airports: The people you meet aren’t going to be cheerful right now, but there might be a sense of camaraderie and shared suffering, like in the trenches, as you hang around Boots aimlessly for something to do.

Wales: The people you meet aren’t going to be cheerful right now, but that’s because it’s Wales. At least in an airport no one thinks you’re a stuck-up bastard who works in the City purely because you’re English. Weighing up this and previous factors, a holiday in Wales rather than an airport is still the better option, but only just.