THE worlds of politics and showbiz came together last night to pay tribute to Britain's greatest purveyor of mucky books. These young binge-wankers were inconsolable

Gordon Brown cancelled a planned visit to a binge-wanking project in East London to speak of his 'utter devastation' at the loss of Paul Raymond, describing the Razzle publisher as the 'people's pornographer'.

Tory leader David Cameron paid tribute, saying it was reading Club International and Mayfair while at Eton that had prevented him over-indulging in sex with the other boys.

"My first evening of self-abuse was with a crumpled Men Only I stole from Boris Johnson.

"It was a Christmas Special featuring the lovely ladies from ITV's 'Mind Your Language'. In the nude. Our thoughts and prayers are with every teenage boy."

He said: "Back in the early days of striptease he returned from a trip to Thailand and demanded that the lads try and fire a ping-pong ball into one of the performers."

Ronnie Corbett said he first got the idea for his famous chair monologues while working in one of Raymond’s strip clubs.

He said: "I was sitting in the wings watching the girls just before I was due on and, unsurprisingly, had developed the most enormous erection.

"I couldn't walk onto the stage with that thing sticking out in front of me, so I got them to carry me on in my chair and did the act sitting down. It was an instant hit."

Business As Usual For Russian Poisoners 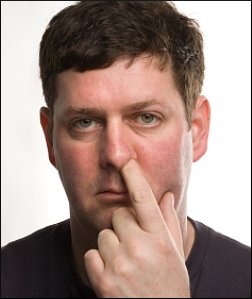 RUSSIA'S new president has told the nation's army of poisoners it is 'business as usual'. Pledging new investment in the industry, Vladimir Putin said it was vital to maintain Russia's position as the democratic world's leading killer of people it doesn't like.

There had been fears the incoming president would abandon the previous administration's commitment to new poisoning technologies.

But Mr Putin, said: "We make many new poison. We put poison up nose so when enemy pick nose and eat it, he killed by poisoned bogie.

"We make special book, so when enemy get to last page it read 'you die' – then book squirt poison in enemy's face."

He added: "We even make special mobilephone which only release poison when enemy say 'I on train'."

The new president was elected by a landslide despite accusations that he has the same name as his predecessor and looks exactly like him.

Mr Putin said: "I not Vladimir. My name pronounce totally different, my hair slightly darker and I one centimetre taller.

"You no believe? Is okay, I send you special book, explain everything."