DAVID Icke has asked the BBC when he will be invited onto the corporation’s flagship political programme.

The former professional goalkeeper and sports presenter who now believes the Queen is a lizard, said he was keen to take part in a ‘civilised’ discussion with Andrew Neil and David Aaronovitch.

Icke, who claims he can ejaculate at least 1.4 million times a day, added: “I wouldn’t shout and talk over people.

“I would explain why the Duke of Kent is a space-werewolf and then I’d listen respectfully while David Aaronovitch puts forward his counter-argument.

“I certainly wouldn’t come out with a load of nonsense.”

He continued: “It’s important to be reasonable, even if the people you’re talking to are either giant lizards or the remote control slaves of the giant lizards.

“I’m not going to flip-out and start shouting ‘FREE US FROM THE LIZARDS!’ over and over again like some nutter until they’re forced to abandon the interview.”

A BBC spokesman said: “That is good to know. Seriously.”

BBC newsreaders stalked by Queen for fifth time in a fortnight 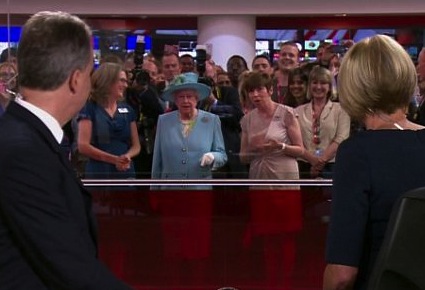 TWO BBC newsreaders have claimed the Queen is following them.

Julian Worricker and Sophie Long said the Queen’s on-air appearance behind them yesterday was the latest incident in what they described as a ‘growing and unhealthy obsession’.

Worricker said: “Twice last week she was sitting in the lobby when I arrived for work. She just waved very slowly and stared at me until I got into the lift.”

Long added: “I was in the cereals aisle in Tesco and when I looked around there she was. She grabbed a box of Sugar Puffs and pretended to read the back of it.

“I said to her ‘it’s upside down’ but she just ignored me.”