PARENTS are worried that a new computer game where players battle Nazis could encourage anti-Nazi attitudes.

Teenager Nathan Muir said: “When I started the game I could go either way about the Nazis  they did have cool uniforms  but by the end, Id killed hundreds and was hungry for more.

I watched Saving Private Ryan and, God help me, I was dementedly cheering the Allied forces like a football fan. I’m so afraid of what I’ve become.”

Video games expert Susan Traherne said: It is a proven fact that games like this desensitise children to the shooting of Nazis and even create neural links between Nazi death and pleasure.

How can these children function in the Britain of today, with violent urges rising every time a fellow bus passenger innocently says that foreigners should be rounded up and put into camps?”

Gamer Wayne Hayes said: As an adult, Im perfectly able to tell the difference between a computer game and reality.

If I met someone with Nazi views in real life, I wouldnt shoot them. Like anyone else, Id stare at the floor until they left, then mutter vague disagreement. 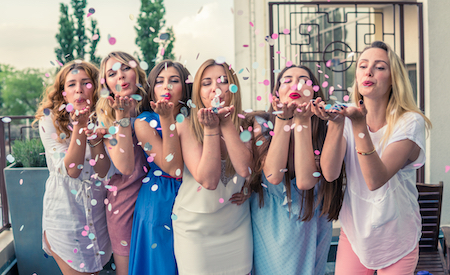 THOUSANDS of hen parties are preparing for raucous yet entirely fake fun.

As the hen party season begins, groups of women are booking hotel rooms in Bath where they will pretend to enjoy doing outrageous but strangely dull things.

31 year-old bride-to-be Emma Bradford said: “We had something called a ‘pamper day’ then we put on special t-shirts, each printed with a single word that summarises our personality.

“Mine said ‘cocklover’ which was a bit awkward as my nan was with us.

“Everyone was laughing a lot, but in a quite forced way because the whole experience felt really empty, although nobody acknowledged that. However we will look back at the photographs and tell ourselves it was amazing.”

Bradford’s sister-in-law Nikki Hollis said: “I remember dancing in a big group to 80s music. My arms felt really tired and I just wanted to be in bed.

“There was a married estate agent who kept poking me in the back with his boner.

“One of Emma’s work friends said a racist thing to a shopkeeper, I lost my mobile and Donna ‘the mental one’ turned out to have legitimate mental health problems.

“The evening ended abruptly when we all had a massive argument about nothing.”