Your dad in The Expendables 3

YOUR dad and his mate have joined the cast of action movie The Expendables 3.

“They had a free buffet on the set”

The pair are pictured on the film’s poster leaning on the shoulders of Wesley Snipes and Randy Couture, with your father wearing the polyester C & A jumper he keeps for working on the car.

Your dad explained: “I did a bit of work for Sly in the 1980s, repairing his garage roof after some kids had been on it.

“He gave me a call and I brought Bruce from the allotment along because he’s at a bit of a loose end until his courgettes need pulling up.

“There is one scene where I’m falling from a helicopter and use a grenade launcher to destroy a barn so I can land on the burning hay. It’s quite good.

“Ron spent most the time talking to that big old Austrian who used to be Mad Max. No wait that was the other one, I forget now.

Anyway hes coming round next week to get some Buddleia cuttings.

Column of light is beacon for alien invaders 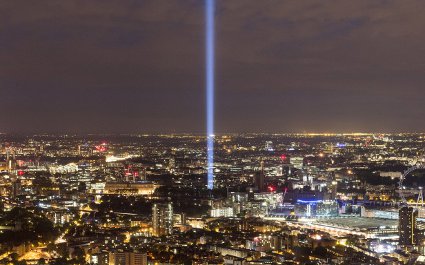 THE London art installation commemorating the First World War is being used as a beacon by an approaching alien armada.

The huge fleet of Tandu battlecruisers had confused our solar system with the uninhabited Tau Ceti, but is back on course thanks to the spectacular pillar of light.

Insectoid commander Thxx-1i8 said: “We are mostly interested in you humans as a food source.

“However, we are merciful so a lucky few will be taken to the slave ships or the breeding pods.

“This galactic satnav is hopeless, so thanks for turning on the big light. We’ll be with you by the weekend.”

Londoner Helen Archer said: “That single shaft of brilliant light is like a message to the heavens that whatever happens we will endure.

“Gives you real hope for the human race.”