ADMINISTRATORS were called into cheese and onion crisps last night as the classic flavour became the latest high profile victim of the recession.

The demise of cheese and onion came at the end of a black day for the British economy which also saw the collapse of conkers, pick'n'mix and a nice pot of tea.

City analysts say cheese and onion was unable to compete in a market filled with radical new flavours including Double Gloucester and red onion, Stilton and shallot, and vintage cheddar and onion chutney.

Bill McKay, head of crisps at Madeley-Finnegan, said: "The thing I'll miss most about cheese and onion is how it masked the stench of stale urine that pervades every inch of this Godforsaken shithole of a country.

"But unfortunately it had begun to look very old fashioned alongside modern British brands such as celebrity cock fights, alco-puke, casual racism and sex with strangers in the back of a Vauxhall Vectra."

He added: "For brands to survive these days they have to adapt. Conkers involved two humans in the same place with no electronic devices.

"And who wants a nice pot of tea when you can pay £1.75 for two square feet of boiling foam?"

Administrators are hopeful that parts of the flavour can be salvaged and have already spoken to Waitrose about incorporating it into a new batch of Hand Smoked Gorgonzola and Vietnamese Chive.

Apple Accused Of Exaggerating How Much You Matter 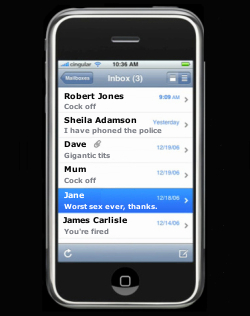 APPLE has been forced to withdraw its latest iPhone advert because it exaggerates how busy you are and how significant your life is.

The TV campaign made repeated claims that you are a meaningful human being who needed an iPhone because you are at the very centre of everything that is going on and are the key member of your team.

However, the Advertising Standards Authority upheld complaints from 17 people you worked with who said you could be lying dead, face down on your desk for six months and no one would notice, unless it was your turn to get the biscuits.

A spokesman said: "According to Apple you need an iPhone to deal with emails, organise your hectic social life, and monitor fast moving world events via the Daily Mail website.

"But the reality is you need to shut up about your stupid fucking phone and just do something, anything that does not involve you being a complete arsehole."

Your secretary Helen said: "Julian Cook's office. Yes Julian, I got your email. It was from your phone was it? I didn't notice. No, there are no messages for you.

"Yes, we sorted that. It seems you inputted the wrong figures after lunch. Of course I told Chris, I had to, he's my boss too you know."

Helen added: "Yes I know it's you again, I recognise the number. No, still no messages. No emails either. Julian, did you get the biscuits or not?"