For Shame, Our Rates Of Interest Can Surely Plunge No Lower, Proclaims Mr Pepys

London, 1694: MR Samuel Pepys, the noted sage and diarist, has proclaimed the nation to be in peril after the rates of pecuniary interest reached the abominable level of two in every hundred.

In a timely missive to the London Gazette, Mr Pepys, of the Old Shaft, Clapham, urged the immediate arrest of the Chancellor of the Exchequer Mr Montagu and Sir John Houblon, the governor of that most vexing of new fangled innovations, the Bank of England.

Wrote Mr Pepys: "Sirs, I find myself in my 61st year, frail with the diabolical kidney stones and soon unable to afford a pint of gin, a bowl of stewed pigeon and a fruity Portugeuse tart.

"My pensions are at the mercy of that bespectacled oaf Sir John and his dire attempts to alleviate the damage caused by the infernal, pox-ridden Dutch and the vagabond fornicators of the Virginian Colonies.

"Once more he has taken a scythe to the pecuniary interest rate in the naive hope that the bankers of Bishopsgate will see fit to release funds to those who would purchase for themselves trinkets and geegaws for their trivial amusement.

"But yet again, the Scottish Bank, of whom I am a sorry client, holds its purse close to its chest while expecting a goodly fellow such as myself to thrive on a stipend of a ha'penny a fortnight.

"Those dam-ned Scotch! When will we learn?

"My gentle fellows, will fair England prevail and prosper? I fear we are now mere whimsies in the playful hands of providence.

"But one certainty presumes above all others – If, in future years, our rate of interest were to plummet below its current abomination we could be in no doubt the affairs of our economy were most surely in the hands of complete and utter fucknuts."

Treasury Has Been Able To Print Tenners All Along 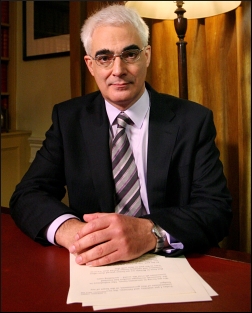 CHANCELLOR Alistair Darling has admitted the economic downturn was completely unnecessary as all this time he could just have printed more tenners.

Mr Darling said he found out about the money printing machine last summer but then forgot to mention it because he had been given so much work to do by the prime minister.

He added: "Last Friday I was visiting a school in my constituency when one of the children asked why I didn't just print more money, and I suddenly thought, 'Oh Christ, there's that great big machine in the basement'."

Tom Logan, from West London, said: "If it's just a case of printing it, I'll have six million please.

"I don't suppose there's any way you can print some with my face on it? Or perhaps just a pair of titties?"

But economists warned that printing new currency could create a confluence of hyper inflationary factors leading to a collapse in sterling and the entire country being consumed by an unquenchable fire.

Emma Bradford, from Stoke, added: "I've absolutely no idea what you're talking about. Just give me the money."