According to a new report by the Institute for Studies limited-run yoghurts, such as Muller Amore Gorgeous Coconut & Lime and Yeo Valley Pear & Butterscotch, offer unparalleled investment value.

Yoghurt collecting has exploded in popularity, creating unprecedented demand for the rarest flavours like Pear & Leek and Plum Trifle, and that trend looks set to continue.

For the keen amateur investor, now is the time to get to the supermarket, before the big boys move in.

There is also increasing demand for vintage yoghurt. In July 2011 a four-pack of 1986 Ski yoghurts including the noted Fruits of the Forest Flavour was auctioned for £46,012.

“They make shedloads of those things.” 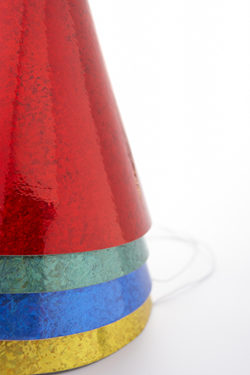 The 18-year-old died in Ibiza after a three-day binge in which she wore the cardboard-and-elastic celebration millinery sweeping the club scene, and which is still completely legal.

Nikkis parents, lovingly cradling a photo of their daughter doing a tray of tequila slammers on her 16th birthday, said: “She was always a bundle of fun and the life and soul of any of the 300-odd parties a year she used to go to.

“She was the first onto the dance floor, sometimes several hours before the venue had even opened, and shed often be so excited shed have to pop to the loo two dozen times a night. But when she started wearing that hat, everything changed.”

The brightly-coloured conical headwear comes in packs of five in many high street shops and can be bought for as little as a couple of pounds. In one Carlisle store, the shopkeeper confessed to selling them to children as young as 10.

Margaret Hollis said “Whenever Nikki put the hat on, usually at about three in the morning, shed become a completely different person. Shed slur her words, stagger all about the place and hardly be able to hold her bifter without falling over.

“I want to know why, during the last 72 hours of her life she spent in a bar snorting vodka, nobody tried to take that damned hat off her head? Somebodys to blame for our daughters death and we want some answers.”

Party favour manufacturer Joytimes Ltd were unavailable for comment but their website states: “We ask all customers to use balloons, hats and those razzy things you blow into responsibly.”