LITTLE Chef has removed Heston Blumenthal dishes from its menu after realising that people did not want to eat minced clocks.

The roadside cafeteria chain said it would stick to pies, sausages and battered fish, accompanied by chips and beans, after customer feedback revealed a preference for food.

Martin Bishop, from Hatfield, said: “I’ve been driving for six hours and I would very much like to eat a pie – if that’s alright with everyone.

“I’m not a character from Shameless, I just want a pie.”

Helen Archer, from Doncaster, added: “I basically am a character from Shameless and I too would like a pie. But it’s not the pie’s fault. Don’t make this about the pie.”

A company spokesman said: “We were throwing away more than 2000 minced clocks a week. Not even homeless Scottish people wanted to eat them.

“Plus, unless you’re using those really expensive binbags, the bits of clock poke through the plastic and jab you in the leg.”

Blumenthal, who first dazzled restaurant critics with his inside-out boxing glove on a bed of remote controls, said: “I think people are a bit scared of new things. But minced clock is really just a metal version of coleslaw.” 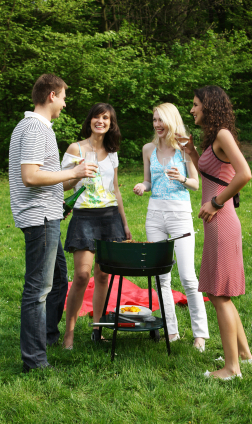 TV adverts featuring sunny barbecues should really include jet packs, it has been claimed.

Shops filled with charcoal and marinated meat on a stick are continuing to insist that cooking outside in Britain remains a viable option.

But a survey found that most people now believe that barbecue-based adverts are trailers for a new film based on a story by Philip K Dick.

Wayne Hayes, from Stevenage, said: “There’s an M&S one where the sun is beating down on a British back garden which looked so fantastical I expected Edward Norton to jump over a hedge while being pursued by flying robots.”

He added: “My nan talks about this summer tradition of outdoor cooking, but she also reckons Christmas adverts used to start in December.

With the growing market for summer-based fantasy, Danny Boyle will direct White Heat, starring Ewan McGregor as a man with just 24 hours to get his barbecue hot enough to cook something.

McGregor enlists the help of a diverse range of quirky characters in his bid to cook a chicken breast all the way through, but fails because none of them have ever been outside for more than 20 minutes at a time.