Only way to save Blackpool tourism is to destroy rest of UK, say experts

BLACKPOOL’S  tourism industry can be saved if the rest of the United Kingdom is reduced to charred, smouldering rubble, it was claimed last night.

Officials at VisitBritain insist the 25% drop in revenues can be reversed if the RAF bombs all of the seaside town’s rival destinations before the Army is sent in to bulldoze the ruins and release spores of Anthrax.

A spokesman said: “Even so, people will still prefer the smoking, Anthrax-teeming remains of Blenheim Palace until Blackpool does something about the appalling stench and the burnt chip fat that seems to cling to you for weeks after you leave.”

In a recent survey of European travellers, visiting Blackpool was voted 50th on a list of ’50 best things to do in the UK’ finishing well behind  ‘becoming a knife-crime statistic’ and ‘eating the food’.

The town’s tourist officer Elaine Graham said: “This summer we had well over 500,000 European tourists visit us, many of whom would have enjoyed the attractions if they hadn’t been spending 16 hours a day picking whelks.”

The plan for the total devastation of the UK is the latest in a series of tourism boosting strategies including a bold attempt to recreate the famed Pamplona bull run using semi-retired Pleasure Beach donkeys.

Local shop owner Janet Howard said: “Whereas Pamplona tends to attract rich, Ivy League students, we enjoyed a fresh influx of Manchester thieves and smackheads, most of whom ran straight into the sea or simply stole a car.

“Meanwhile the animals stood around shitting and looking confused and then it rained, turning the Golden Mile into a river of liquidised donkey turds.

“It was all very sophisticated.”

Cowell Sends Urchins Back To Workhouse 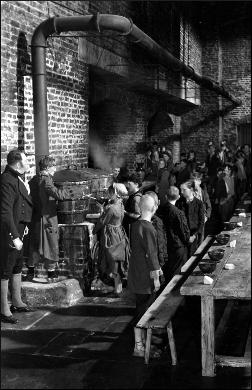 STREET urchins Diversity are to be returned to the workhouse on half rations after humiliating their master in front of the prime minister.

Lord Simon Cowell set about the urchins with a stiff birch rod after a shameful performance outside 10 Downing Street during which the one that looks like an Ewok was dropped on his head.

They will now be returned to Lord Cowell's workhouse on rations of one small, rotten parsnip per week and be forced to make doilies and antimacassars without respite, until they either die of exhaustion or are sucked into the deadly machinery.

His Lordship said: "I gave those sinful wretches an opportunity for music hall fame and they repay me with such nauseatingly abominable incompetence as to make a mockery of my good nature.

"Had the toads spent more time rehearsing instead of eating sweets and indulging in foul acts of self-pollution, they may have lived beyond their teens."

He added: "Damn them their wretched hides! Damn them all to hell!"

Earlier this week solo dance urchin George Sampson was caught by guards during an attempted escape from Lord Cowell's dark satanic mill of dreams, and thrashed to within an inch of his life before being sold on to a sadistic chimney sweep with repulsive tendencies.

Mr Sampson Esq, the father, said: "T'weren't the lad's fault. The Lord Cowell did give 'im only tuppence a DVD, even though 'e 'imself did make at least a shillin' on each one.

"On top of this Lord Cowell did invoice 'im for production and promotion costs, meaning there weren't enough left for even a small bowl of the thinnest, most meagre stew.

"Still, at least George will have lots of 'appy memories to take with 'im up all them chimneys."