THE Pound is not just great, it's fabulous, the prime minister confirmed last night.

Gordon Brown said he could not understand why anyone would say the Pound had collapsed in value by around 30% in the last three months when that was obviously not the case.

He added: "According to this top secret report from MI5, a pound is now worth at least $47 while my network of spies has established beyond doubt that the Euro is simply a figment of your imagination."

The prime minister spoke out following shadow chancellor George Osborne's nervous breakdown and his outlandish claim that the Pound seems to be doing particularly badly at the moment.

Mr Brown added: "It saddens me when a young man such as Mr Osborne loses his mind and starts inventing fantasy exchange rates and fictional currencies.

"This is a time when politicians of all parties should be in agreement. With me. It is certainly not a time to go around pointing things out like some kind of homicidal maniac."

Meanwhile Mr Brown will today outline his latest plan to kick-start the British economy with a series of tax cuts funded by "starlight, sunbeams and happy, happy thoughts".

He will also unveil dozens of multi-billion pound infrastructure projects, including a state-of-the-art hospital for damaged fruit and a high-speed rail link to the undersea kingdom of Atlantis. 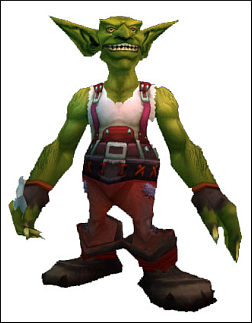 A WOMAN has divorced her husband after he used the computer game World of Warcraft to conduct affairs with a series of imaginary woodland creatures.

Mrs Logan said: "I was proud that my husband was a level three Night Elf of Azeroth and I fully supported his efforts to suppress the Undead Forsaken of the Lich King's Horde.

"Little did I realise that while his comrades risked their pretend lives in blood-soaked combat, he was in a dark corner of Ashenvale Forest taking goblins up the back passage.

"It all came to a head one Sunday afternoon. I brought him a cup of tea, expecting him to be slaughtering his way through a column of Orcs, but instead, there he was, slap-bang in the middle of some hellish daisy chain."

Mr Logan insisted he would never have allowed his love of goblin sex to spill over into his actual life, but did admit he was currently trying to build his own dragon.

He added: "It is quite difficult to get an animal to breath flames.

"You basically have to use a small propane cylinder with a rubber tube that goes through the skin, into the lungs, up the windpipe and has small pilot light on the end.

"At the moment I'm working on a fire-breathing alligator strapped to a micro-light."