SUPERMARKET giant Tesco has stepped up its campaign against TV chef Hugh Fearnley-Whttingstall by nailing a live chicken to the door of River Cottage.

Attached to the squawking bird was a note warning the chef he had 24 hours to 'cough-up 86 grand' or there 'might just be a little accident'.

Last week Tesco boss Sir Terry Leahy and two henchmen used buckets of chicken blood to paint 'Every Little Helps You Die' in 10 foot high letters on the side of the idyllic West Country small-holding.

Tesco's latest assault follows a barrage of polite letters and phone calls from Fearnley- Whittingstall asking if the company fancied a friendly chat about chicken welfare over a big pot of tea and a slice of Hugh's extra-chocolatey home made chocolate cake.

The chef had hoped to arrange the meeting for a lovely warm afternoon in mid June, just as the last of the apple blossom had floated away on the breeze and the River Cottage strawberries ripened to the colour of a Dorset pillar box.

But the supermarket refused and sent Fearnley-Whittingstall a £2 roasting bird stuffed with a copy of its accounts from 2007 and a letter explaining why its shareholders need chickens to drown in their own faeces. 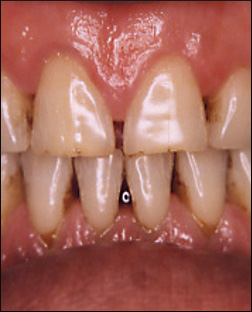 BRITAIN has given up on dental appointments and decided to settle for having quite bad teeth, according to a new report.

In the past decade NHS dental reforms have turned British teeth from their traditional beige to a deep brown, while the nation’s breath is now at its worst since the Crimean War.

With most dentists now ex-directory the NHS is recommending anyone suffering extreme decay to go out into the street and start a fight with a drunken tramp.

Wayne Hayes, a botox salesman, said: "I now have an appointment with an NHS dentist. It's not for another 45 years, but I will be allowed to pass it on to my kids."

He added: "I tried to sign on with a private one but he told me to come back when he needed a new roof for his farmhouse in the Dordogne. Anyway, I really like soup."

Tourism information officer Bill Mckay said his dog Tina would no longer kiss him because his breath was so bad, while Nikki Hollis, a trainee beautician, said her boyfriend really liked her new toothless look.

She said: "He’s been pestering me for years to have them taken out. It’s nothing to do with oral sex. He just likes women without teeth."