SUPERMARKET giant Tesco is offering a sandwichalisation service, giving customers the chance to place any form of matter between two slices of bread.

In recent years the company has tried to increase its share of the market in inevitably disappointing pre-packed sandwiches for office workers too pointlessly busy to prepare their own.

But after trailing Marks and Spencer for eight long years, Tesco finally turned things around by recruiting a team of mentally ill people to develop sandwich fillings, such as paella.

Now the company hopes to consolidate its position by fitting every store in the country with a 20ft long sandwichaliser.

Tesco sandwich chef Tom Logan said: “All you have to do is turn up to your local store with a pile of anything – animal, vegetable or mineral, alive or dead – and as long as it weighs under half a ton you just tip it into the processing chute.

“The sandwichaliser will pulverise it, slather it with mayonnaise, place it in between some bread and slice it diagonally down the middle. Some lights will flash and then it spits it out and says ‘bon appetit’ in the digitized voice of Sandi Toksvig.

He added: “So far we’ve sandwichalised pottery, stolen dogs, even a VHS copy of Jean-Claude Vam Damme’s Blood Sport. Each of them far better than tuna mayonnaise.”

Stephen Malley, a pointlessness from Doncaster, said: “It’s made my sandwiches into a measure of my wit and creativity, in that trying-too-hard, Facebook sort of way.

“Today I’m having old newspapers with chair and pickle on wholemeal. I’m hoping it will lead to sex.”

Sandwich expert Nikki Hollis added: “The interesting thing about supermarket or service station sandwiches is that however disappointing you expect them to be, they still disappoint.”

She added: “Well, it’s interesting to me.”

O'Leary Apologises To Leprechauns For Stealing Their Gold 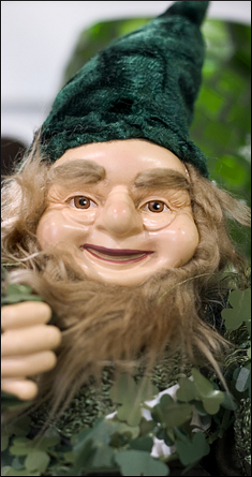 RYANAIR chief executive Michael O’Leary has asked the little people of Ireland to forgive him for stealing their precious gold.

Speaking to an old willow tree near Galway, O’Leary vowed to make amends by leaving a gold coin under every toadstool between Limerick and Killarney, as outlined in Ryanair’s recent financial report.

He told a passing dairy cow: “It was wrong of me to fund a travel empire using the riches of the little people. When you see them, give them this bag of carrots and say I’m sorry.”

O’Leary has built a reputation for refusing to apologise, most notably when he ran up and down the aisle of a flight to Dusseldorf, wearing a turban and shouting ‘I’m a bomber, so I am! Kaboooom!’.

But recent weeks have seen him apologising on an almost hourly basis, often for things that have not happened and to people that do not exist.

Yesteday he told eponymous TV bear ‘Gentle Ben’ that he was sorry for using the last of his piccallili and then had 300 tons of the condiment sprayed across the Appalachian mountains from a specially chartered 747.

But his apology to the leprechauns marks a watershed as O’Leary has been among their fiercest critics, often describing them as ‘two foot of fuck-all with a face like a bag of broken knuckles’.

A Ryanair spokesman said: “Ladies and gentlemnen, once again we’ve had to switch on the ‘fasten seat belts’ sign as another turbulent weather system passes through Mr O’Leary’s head.”