SEXUALLY abusing a child is as sinful as eating soup with a dessert spoon, Pope Benedict confirmed last night. So now you know

Launching the latest edition of The Vatican’s Quarterly Guide to Sinning, the Pope said that God would take up to three years to forgive those who misused cutlery, placing it in the same ‘Sin Basket’ as underage sodomy.

The Pontiff said: “I’ve arranged all the major sins in a series of handy baskets. The top basket is things like condoms and abortion and women having thoughts.

“The next basket is certain kinds of war and being a bit shy with the old collection plate. And down here in the 24th basket is child buggery and spoon ignorance.

“That doesn’t mean that spoon ignorance is okay, it just means that if you are, for instance, a priest and you get stuck into a bowl of Scotch broth with the spoon that was positioned at the top of the place setting at right angles to the knife and fork, then there’s only so much we can do to protect you.”

He added: “Men who use the wrong cutlery have simply lost their way on the path to God. And we also have to remember that, in the right light, a dessert spoon can be incredibly sexy.”

Meanwhile, the Church is now offering an exchange rate of three acts of paedophilia to one act of fly-tipping. 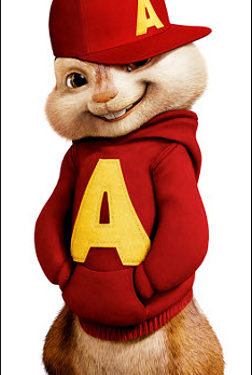 ONE of the biggest pop success stories of the last 20 years is set to storm the charts again after Alvin agreed to rejoin the Chipmunks. The Chipmunks were one of the biggest acts of the 1990s, regularly swapping places at the top of the charts with all-female chipmunk group The Chipettes and their great Irish rivals, the Smurfs.

But the group was torn apart by a series off violent rows between Alvin and glutinous songwriter Theodore. When Alvin demanded changing the name from The Chipmunks to Alvin and the Chipmunks, Theodore stormed out of the meeting and vowed to become gigantically fat.

Alvin, meanwhile, racked up a series of solo hits while fighting his own battles with processed cheese and home-made chipmunk vodka.

But talk of a reunion has been rife since Theodore and Simon launched a successful comeback in 2005 with a slightly different version of The Chipmunk Song.

Alvin said last night: “I get embarrassingly excited when the three of us are in a room. It feels like coming home. And I’m really looking forward to performing with Theodore, especially now he’s lost some of that weight.”

Theodore added: “It’ll be amazing to get up on stage with Alvin again and perform my songs in a way that does not give undue attention to any one member of the group. It’s a dream come true that Alvin’s lawyers have finally accepted that.”

Meanwhile Simon, the tiniest of the Chipmunks, will be glad to be focusing on the music again after it emerged he had cheated on his wife with a box full of gerbils.

Alvin and the Chipmunks were inspired by the success of Chip and Dale, the godfathers of Chipmunk pop who stormed the charts in the early 1980s.

Chip went onto a successful solo career and was arrested in a gentlemen’s lavatory in Los Angeles, while Dale is now the assistant manager of the second largest Costa Coffee in Truro.