The Shard turned into a charity shop

The Shard’s owners greenlit the move after struggling to find paying tenants for the 87-storey skyscraper.

“Do you like music? Then you’ll love our immense collection of CD singles from 90s acts like B*Witched, OMC and Another Level.

“And bookworms should check out our 33rd floor, which houses two million copies of the Fifty Shades trilogy in varying condition.

Commuters at London Bridge have complained that the 28,000 old ladies who run the shop are bringing the area to a standstill because they can’t remember which pocket they put their Travelcards in.

Can I have my free golliwog now? asks Carswell 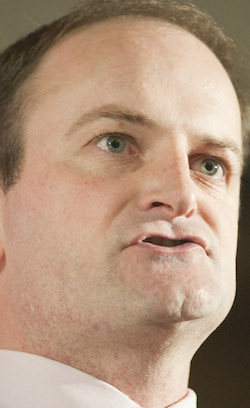 THE Tory MP who defected to UKIP has asked when he gets his free golliwog.

At a press conference in London, Douglas Carswell said joining Nigel Farages party would help him achieve a lifelong ambition of owning the infamous cuddly toy.

He said: You cant buy them in the shops anymore – because of that Europe – so the only way you can get one is to join UKIP.

Nigel has established a brigade of elderly patriots knitting golliwogs by the dozen. Theyre top quality with proper little jackets and everything.

Carswell was inducted into the party this morning after passing a DNA test and handing over the blueprints for his plan to privatise the fire brigade.

He was then given 45 minutes to convince a panel of UKIP councillors that his surname was not the Urdu word for sneaky.

A UKIP spokesman said Carswell will receive his golliwog at a special dinner this evening along with his joining pack of a badge, a pencil and his ‘secret UKIP mantra’ that he must never reveal to anyone.

The Clacton MP added: Im going to call my golliwog ‘Steve’ and put him on the dashboard of my car. That way I can see his smiley face and remind myself what it means to be free.